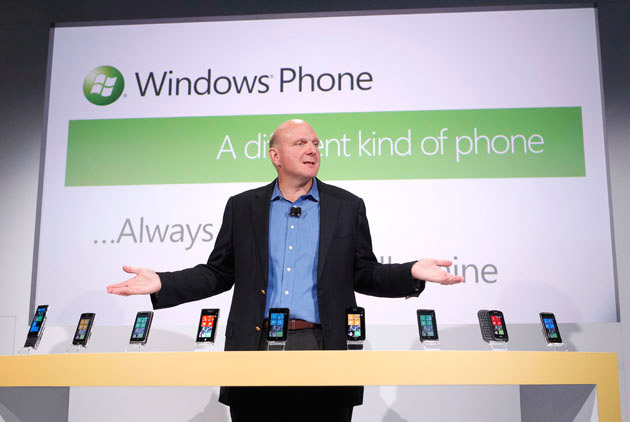 A few minutes ago I was asked to write something about the different models of Windows Phone 7 that are out there. Then I’m like, there’s no way I’m writing about 10+ phones sight unseen, so I decided to limit the piece to the phones that will be available at launch right here in the U.S. Turns out there are five such phones, according to Microsoft. Only two carriers will have Windows Phone 7, um, phones at launch: AT&T and T-Mobile. On AT&T you’ve got the HTC Surround, the Samsung Focus, and the LG Quantum. T-Mobile has the HTC HD7 and the Dell Venue Pro. Woo!

What are the differences between the five phones?

Would it be churlish to suggest that there are no major differences between them?

It seems to me that Microsoft would have been better served by putting all its might behind one model, then promoting it to the moon. You know, like what Apple did with the iPhone and what Verizon Wireless did with the Droid. (How many people do you know that refer to all Android-based phones as “droid”?)

Again, T-Mobile is one of only two carriers to have Windows Phone 7 at launch (in early November). There’s the HTC HD7 and the Dell Venue Pro. Let’s have a look-see.

Does HTC make anything “bad”? Probably not; all of its phones are reasonably good. And that seems to the case here. It’s touchscreen-only, with a 4.3-inch screen. Plenty big, yes. A decent amount of built-in storage, too, coming in at 16GB.

A Dell phone? Interesting. Well, it has a 4.1-inch touchscreen, but it does have a slide-out kaypad.

Let’s move on to AT&T, which has three phones up its sleeves.

Compared to the HD7, it’s slightly smaller, at 3.8 inches. It’s also touchscreen only, just like the HD7. It’s being pushed as a “media” device, which is pretty ludicrous. Does your phone have a headphone jack? Then you can listen to music on it. And for a media device, really, only 8GB of built-in storage? Hm.

Samsung’s entrant, also touchscreen-only, and four inches at that. 8GB of storage, too. It doesn’t seem to have any other gimmicks to its name.

This seems to be the least “spiffy” of the launch phones; it looks to be something straight out of 2006. It does have a slide-out kaypad.

So let’s review this.

Of the five launch phones, only two have a keypad: the Dell Venue Pro and the LG Quantum. The others are touchscreen-only.

How does someone buy a phone these days? Ideally you’d want a phone on a proven wireless provider, right? Maybe AT&T is great in your area, but T-Mobile stinks? Or maybe vice-versa? It goes, OK, I want Carrier A, let’s go to the mall and see what I can get when it’s time to renew my contract.

For T-Mobile, OK, it will come down to keypad or no keypad. Once you’re beyond that, there’s nothing doing. Both phones have the same tile-based operating system, both will tie into your Xbox Live and Zune accounts, both will read your Office documents.

For AT&T, it comes down to the same thing: keypad or no keypad. But beyond that? Who’s going to sit there and rack their brain over the minuscule differences between the HTC Surround and Samsung Focus? I imagine, much like what Matt said, the average person will merely ask the kid behind the counter in the AT&T store, “So, what’s a good phone these days?” He’ll say, “Oh, the Model XYZ is pert great,” then you’ll go with the XYZ.

So, five phones that are more or less the same, or similar enough that you’d be a fool to try to differentiate between them (outside of the keypad/no-keypad dichotomy).

It’s hard to figure out who’s in charge here. This is Microsoft’s party, right, Windows Phone 7? Not necessarily a last hurrah, but you’d have to figure that Microsoft would really like to see the platform take off. And if that’s the case, what sense does it make for Microsoft to say, “Woo! Here’s our new platform. We have, like, five phones to choose from. Well, there’s only two carriers at launch, and the phones all basically do the same thing—talk to your friends on Xbox Live!—but trust us, this is the future!”

I don’t know, it just seems that Microsoft would have been better served hooking up with one provider, helping them design something truly special, then push that to the moon.

As it stands, you’ve got five phones to choose from, across two carriers, that all do the same thing.