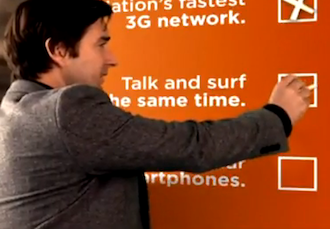 The Verizon iPhone nears. And that’s great news. I can’t wait to get one on day one and leave AT&T far in my rearview. But wait, it’s not all peachy-keen as The Wall Street Journal reminds us today. AT&T does have two advantages over Verizon right now: its GSM technology is more widely used around the world (meaning the phone can roam around the world), and you can use data while on a call. But it sounds like the latter is about to get eliminated.

Over the last year, we’ve had to listen to Luke Wilson tell us that “the nation’s fastest 3G network” is also the one that lets you “talk and surf at the same time.” Currently, Verizon cannot do that due to a decision the people behind CDMA (the technology that Verizon uses in its phones) made to split data and voice into separate signals. But as WSJ reports:

Now, they’re working to overcome it. A solution that will allow CDMA networks to carry voice and data simultaneously will become commercially available in the first half of next year, said Brad Shewmake, spokesman for the CDMA Development Group, an industry organization.

Verizon won’t commit to a date for such a feature, but they are working on it. From the story:

Verizon Wireless is working on providing that capability, said Verizon executive Brian Higgins. He wouldn’t say when it will be ready, but played down the need for handling voice and data at the same time.

But the last part is important. I’ve had an iPhone for over three years now and I can only recall a handful of times when I needed/wanted to use data while on a call. And almost all of those times have been when I was on hold. And probably half of those were when I was on hold with AT&T.

AT&T touts the feature, but it’s simply not that important. Certainly, it’s not important enough to stop me from switching from a service that has poor coverage in some big cities, to one that has great coverage in those same cities. Coverage is a much more important feature.

But I’ll admit that the global roaming ability is nice. I was in Japan earlier this year and was able to buy a (ridiculously expensive) plan from AT&T so my phone would work there. With a CDMA phone, I would have likely be out of luck. But again, a small price to pay for my phone to work 99 percent of the rest of the time.

So, for an encore, let’s enjoy one of Luke Wilson’s lovely AT&T commercials below. You’ll note that instead of being 4 to 1 in favor of AT&T, come next year, it looks like it will be more like 1 to 1 (and I’m sure Verizon would argue that they have the fastest 3G network — there are only about a billion studies that say different things).