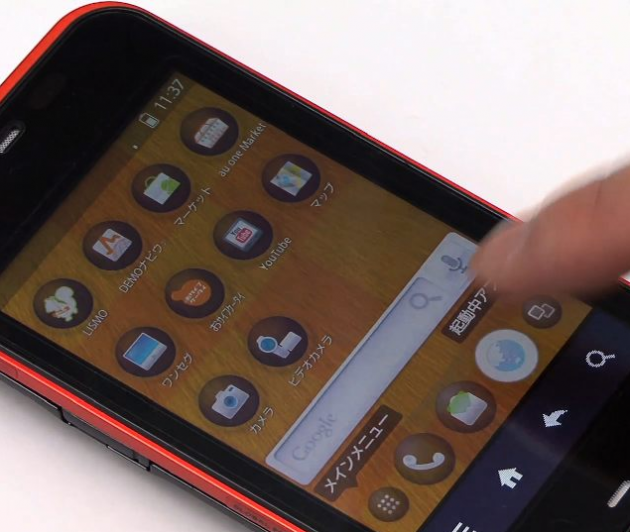 Earlier this week, we blogged Sharp’s new Android phone, the IS03. On paper, the handset has a lot going for it: a nice 3.5-inch touchscreen with 960×640 resolution (same as the iPhone 4) with a combined memory LCD, a 1GHz Snapdragon CPU, a 9.6MP CCD camera, Wi-Fi, and Android 2.1 as the OS.

At CEATEC 2010, Sharp is giving attendees the chance to try the handset out for the first time, and that’s what I did. After fondling the phone for about 5 minutes, my first impression was that much like Sharp’s Galapagos (Android-based) tablet, the UI was too sluggish.

It was worse than with the tablet actually, making me hope for improvements until Sharp rolls out the phone here in Japan next month. What’s really nice though is the ISO03’s screen with the super-cool memory LCD on the bottom (which shows the time and battery life even when the main display is off).

I just think about how often I press the home button on my iPhone just to check the current time to understand this mini LCD inside the bigger LCD actually makes a lot of sense.

Here are two videos of the IS03 in action that I shot at the Sharp’s CEATEC booth (click here for our previous article on the phone):
http://blip.tv/play/hMQ5goK6NQA%2Em4v