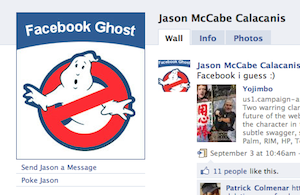 Wait a second. It seems that everyone is missing one key element of the latest faux-controversy about Facebook. What is Jason Calacanis doing back on Facebook?

Calacanis kicked off the latest bitching session today by posting an email he sent to Facebook CEO Mark Zuckerberg and COO Sheryl Sandberg. In it, he chastises the social network for not having an opt-in policy for its new Groups feature. But wait — how would he even know how the new feature works? Didn’t he say over and over and over again that he was done with Facebook?

He deleted his account — on video even! And yet, a few weeks later, he was still there. At first he made it sound like a third-party site reactivated his account, but then he clarified to say that he had logged in to Facebook Connect to clear something up and believed that reactivated his account. Facebook said that wasn’t true, and that he must have pro-actively cancelled the deletion request. Calacanis went quiet after that.

We would have thought that since he was so adamant about it, he would have immediately deleted his account once again. But apparently not. As you can see now, about a month later, in August, he left this Wall post to his followers:

Note: if you stumble on my Facebook page it’s in hybernation mode. I just don’t trust the folks at Facebook with my data.

Even weirder? A couple weeks later, he posted again on his Facebook Wall. This time, a link to his latest rant.

So apparently, Calacanis is done with Facebook except when it can help him promote his content. Or when it can be the fodder for new content, as we’re seeing today.

We agree that it is fairly lame that people can be added to any group. But that’s not a privacy issue — Calacanis’ (and Mike’s) own friend added them to this group! It’s just lame because of the insane amount of spam that can result from unknowingly being added to a group.

But this shouldn’t have been an issue Calacanis ever encountered. He deleted his Facebook account months ago, remember?