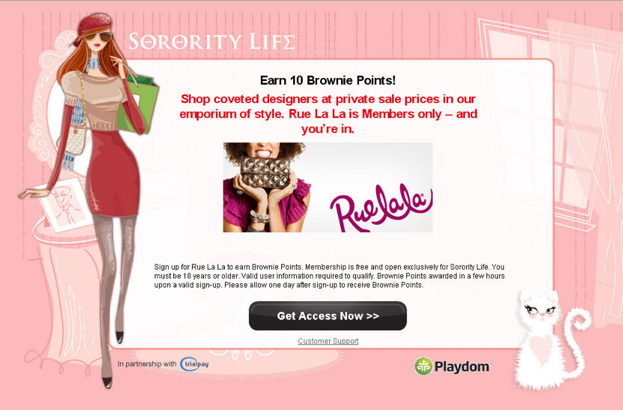 Offer provider TrialPay is launching a new product today that enables game publishers to monetize social currency offerings, called DealSpot. The new product essentially allows games to offer exclusive deals to game players within a game, as opposed to the offers appearing in a separate game outside of the game (often called the ‘offer wall’).

The company is partnering with Groupon, Tippr and Living Social for local deals, LOVEFiLM for subscription entertainment, branded retailers such as Yves Rocher and Lancôme for shopping, Rue La La and Mertado for flash sales and more. Deals automatically appear in games and prompt a user to click on the link to receive the exclusive deal to earn virtual currency.

DealSpot has been running in private beta on Playdom’s Sorority Life, Playfish’s Restaurant City and iWin’s Family Feud. And TrialPay allows publishers to offer the deals based on player performance. For example, iWin will use DealSpot to display special promotions to players who have reached certain levels in Family Feud. Another example of an implementation took place within Playdom’s Sorority Life campaign, which rewarded players who purchased a Groupon for $25 off a $50 purchase at Gap also received with the game’s “Brownie Points.”

TrialPay received a big vote of confidence when Facebook selected the offer provider to power in-game and shopping offers for Facebook Credits. Peanut Labs, which was recently acquired, was also used by Facebook for its offers initiative. And Peanut Labs has its own deal-focused offer product, called Cherry Deals.