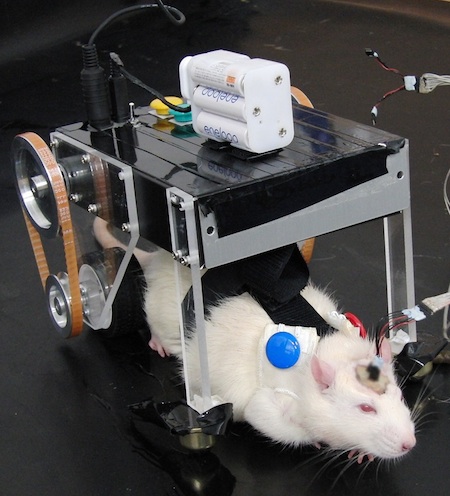 History has always told us that the chimera is bad for business. Centaurs were too sassy to survive and the basilisk was really mean. But what about a rat connected to an electronic car by its brain? That’s just creepy.

This creature, made by researchers at the University of Tokyo, trained a rat to move a small car with only its brain. Apparently the car is directly wired to the animal’s brain and is the first step in creating man-machine interfaces for paralyzed patients.

In the RatCar, tiny neural electrodes [the dark dots on the tip of the device shown on the photo, right] were implanted in the motor cortex of rat brains, and the animals were suspended under a lightweight, motorized “neuro-robotic platform” with wheels. The objective was to make the vehicle collaborate with the rats to achieve the locomotion they desire.

While I’d be a little concerned the rat might feel some discomfort, I think the rodent probably thinks its cooler to be a cyborg than to have an enclosed brain pan. I know I would. Add some guns and a jet pack and you’re really talking good times.