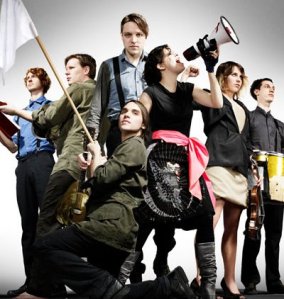 Ok, I admit it. Mostly I just want to write something about Arcade Fire because I saw them play in Berkeley last night,  I can’t get them out of my head and I owe TechCrunch a post. If Mike can have Virgin America and MG can have the iPhone, I chose to fan out over Arcade Fire, right?

But I do have a point here. A big part of what made them so phenomenal wasn’t just the music it was how they played. They were a wild, musical-chairs-cacophony, going totally ape-shit on instruments as varied as a megaphone or an accordion, and yet somehow they produced a tight, controlled sound. I’m still not sure how they did it. But it struck me watching them how much they looked like the musical version of a great startup.

Here are some lessons I think we could all take from Arcade Fire:

1. Never let anyone tell you you’re not a rock star. Remember that scene at the end of Revenge of the Nerds (Millineals, look it up on Google, I’ll be here when you get back.) where they form a band and the uber nerd, Poindexter, plays an electric violin? I remember watching this absurd movie and thinking that was where the movie stretched reality a little too far. How could a screechy electrified violin ever be cool? Well, Arcade Fire proves me wrong. Ditto accordions. The lead singer and his brother were also raised Mormon– they quipped that the contact high from all the pot being smoked around them in Berkeley was the closest they’ve ever come to being high. This has to be a band of the most unlikely rock stars and yet, they’re one of the hottest indie bands on the planet. Pedigree, look, connections– all of that doesn’t matter. It’s talent and having the idea and guts to get on stage in front of the cool kids with an electric violin.

2. Organized chaos. Startups are messy. Everyone does every job, whether they’re great at it or not. And there’s little time for meetings– you just jump in, grab a project and run. It’s like that adage about how ducks just glide across the water but underneath they are furiously paddling. There was some crazy stuff going on on stage last night– wailing on drums, climbing scaffolding, banging on the scaffolding with drum sticks, bashing tambourines against pianos. And yet, it all sounded like it does on the album.

3. Versatility. There really aren’t titles or labels in Arcade Fire– everyone seems to play every instrument. It was as if they were playing a game where after each song each band member would rotate one instrument to the left. Band members went from drums to accordion, from violin to piano, guitar to piano to drums. There were more instruments set up and ready to go than people in the band and they’d just fly around stage– sometimes mid-song– grabbing something, wailing on it, then moving on to something else. I realize I keep using the phrase “wailing on it” over and over again, but I’m struggling to come up with anything as apt to describe what they were doing. There are no prima donnas in this band– that or they hide it really well on stage.

4. Giving Back to the Community. One thing that made me love Arcade Fire more than I already did was reading in Vanity Fair that they give partial proceeds of record sales, song rights and $1 of every tour ticket to Partners in Health, an amazing organization that’s rebuilding Haiti’s medical system– long before there was an earthquake and will be long after. I spent a good deal of time with Partners in Health founder Paul Farmer in Rwanda last year and was incredibly moved by the sacrifices he’s made to bring the poor the same level of care we get in the US. Yesterday, I was talking to Shervin Pishevar and he was telling me about gifting 1% of his SGN stock to an organization called Invisible Children and is going to Uganda and Rwanda tomorrow to see their work up close. He’s pioneering a pre-Bill-Gates like giving pledge among entrepreneurs called the 1% Pledge, where founders to give 1% of their startups to a cause they care about before they hit it big, instead of giving that to yet another adviser.

But giving back doesn’t just have to mean giving money or stock to non-profits, it can also be giving more intangible things to the community whether that’s open sourcing code or in the case of TechCrunch, holding geeky movie screenings and creating an award ceremony called The Crunchies we co-host with our biggest competitors. It may not have been the case in the early days of Silicon Valley but with so many companies relying on a base of people to create the content they profit off of, giving back is just good karma and good business.