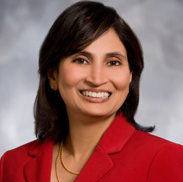 Well, that was quick. With the news this morning that Tony Bates, a senior VP at Cisco who runs its Enterprise Group is exiting the company to become CEO of Skype, Cisco is announcing that CTO Padmasree Warrior is taking on Bates’ old role (and will also remain as CTO).

Warrior will officially become SVP/GM of Cisco’s Enterprise, Commercial and Small Business Development Group. As Cisco’s communications director John Earnhardt writes in a blog post, enterprise is “the heart of Cisco’s business and we are fortunate to have the talent of an (ahem) warrior take over this industry leading team of over 10,000 world-class engineering talent.”

The fact that Cisco is promoting Warrior, who joined the company in 2007, to this new position could mean that the company is teeing her up for a potential role as CEO sometime in the future. Enterprise is Cisco’s bread and butter, and it’s an important leadership position in the company. In the role, Bates was responsible for 80 percent of Cisco’s business, which amounts to $20 billion in revenue (and 55 percent of Cisco’s profits).

Bates also served as General Manager of Cisco’s Service Provider Group, responsible for annual revenue of $10 billion. It’s unclear who will take over this role at Cisco.