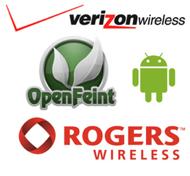 OpenFeint, the comprehensive social gaming platform from Aurora Feint, has landed a deal with Verizon to feature the platform’s top Android Games on Verizon phones.

According to a recent OpenFeint newsletter sent to developers, the social gaming platform struck deal with Verizon, Rogers Wireless and Bell Mobility to offer their consumers Android game recommendations, all curated by OpenFeint (meaning, OpenFeint has picked the best of its Android games to be featured on those operator services).

So why is this a big deal? There are a couple of reasons why OpenFeint’s deal is interesting. First, OpenFeint used to be social gaming platform exclusive to the iPhone; and actually gained a lot of traction on the platform, powering social gaming services for over 30 million users and growing at a monthly pace of 25 percent. But Apple recently launched its own gaming platform, GameCenter, for developers which poses competition to OpenFeint.

In turn, OpenFeint is expanding to the Android platform, and deals with Android-phone carriers help expand the reach of their games. For Verizon, this is a way to create its own app and
games discovery experience without relying solely on the Android Marketplace, which has sub-par discovery features. We already know that Verizon is launching a V CAST App Store on Android that will exist outside of Android’s own Market (thanks of course to Google’s open platform, since this can’t be developed on Apple’s closed platform). Clearly Verizon is looking to provide features, such as curated apps and recommendations, that the Android Market lacks. Of course, Google is trying to create a better Android Market experience, but those efforts could be for naught if Android carriers like Verizon beat them to the chase.