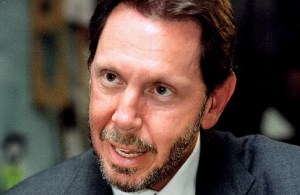 I used to cover enterprise software for BusinessWeek. You’re probably not impressed by that, and you shouldn’t be. That beat is a combination of a punishment and proving ground because despite being a huge market, most enterprise software purchases are ones that IT managers grow to hate and one that few everyday readers care much about. One thing has made enterprise software an interesting beat: Larry Ellison.

Whether it’s his love of the ladies, his yachts, his mysterious lack of eyebrows, his strategic brilliance, his quick-witted jabs at competitors, random musings that he may buy Apple, or declarations that software is done as a category and he’d just buy everyone up, Larry Ellison has long been the software reporter’s gift that keeps on giving. Tony Stark in IronMan was reportedly based on a hybrid of Larry Ellison and Elon Musk, and I recognize way more Ellison than Musk in the depiction.

Only — pity for reporters– Ellison seems to have tired of the spotlight. Few magazine covers, no billion-dollar hostile takeovers, no wacky press conferences, no weird Shakepearian dramas with former proteges. Just a well-performing stock and growing business. Yawn.

Part of that is because Oracle either bought or trounced arch-rivals with its buy-not-build application strategy, and like most companies, Ellison becomes more interesting when he has a foil. It looks like that new foil is HP. Hallelujah, enterprise software is getting interesting again.

Here are the new players and plotlines in the Valley’s latest drama:

Mark Hurd– The New Protege: Ellison has a long history of deputies he champions and then burns through, and Hurd is the latest champion. Stable, operational, and ruthlessly cost-cutting Hurd is a good yin-yang for big picture, risk-taking, engineering-focused Ellison and those yin-yang relationships tend to work best in Oracle. His longest running lieutenant is the secretive and meticulous Safra Catz who staunchly refused interviews and once barked at me that she was “ALL ABOUT THE BUSINESS” and hated when we’d write personality profiles about executives. Catz is as much a reason people thrive or fail in the Oracle executive suite as the more famously mercurial Ellison.

Leo Apotheker and Ray Lane– The Avengers: The two men teaming up to run HP are two men burned by Ellison, Leo Apotheker who was CEO of SAP in the years Oracle unquestionably trounced it and Ray Lane, one of Ellison’s many heir apparents over the years, who went to Kleiner Perkins to reinvent himself as a VC…to let’s just say mixed reviews. I’m not saying they’re going to go in everyday and whiteboard out how to take Oracle down, but these are two men who’d love to best Ellison at something.

Hardware and Software Colliding–The Battle Royale: So HP and Oracle are traditionally partners more than rivals. But the lines are blurring. For the better part of a decade, HP has been buying up software companies envious of the margins as hardware became more and more mature and commoditized. Oracle has only recently started to get into hardware with its acquisition of Sun Microsystems. But Oracle’s strength has been that enterprises pretty much have to buy its databases and once the foot is in the door, they sell them more and more parts of the stack. So it’s less about selling to small businesses that will continue to drive Oracle’s growth and more about getting into more big verticals and selling each company more stuff.

A few weeks ago I was talking to veteran tech reporter Jonathan Schwartz from USA Today said he thought Oracle might try to buy HP sometime in the future. That seemed far-fetched, but Schwartz may wind up looking prescient. Either way, the battle is on. Otherwise, Ellison wouldn’t have sent this deliciously catty note to the Wall Street Journal. His seemingly-impetuous jabs are always more calculated than they appear. HP and Oracle have been in the same headlines too many times in the last few weeks to stay in mere coopetition territory for long.

This isn’t about Hurd or Apotheker– this is about two colliding giants who need to keep their stock prices up and have found the best way in the past is through acquisitions. Oh yeah, and both have plenty of spies– Hurd is no doubt still plugged into HP and Lane at least knows how Ellison’s mind works.

Marc Andreessen– The Spoiler? Ok, here’s where I get even more speculative, but it’ll be interesting to see the role Andreessen plays in all of this. He’s the savviest member of HP’s board and an admirer of Ellison’s style, track-record and brilliance. He’s cut from a similar cloth too. He can be charming or utterly eviscerating, and he sees turns in the market ahead of most people. Having covered all four of them, I believe that if anyone could play chess with Ellison it’s Andreessen, not Lane or Apotheker. Separately, Andreessen has said that he thinks enterprise software is ripe for disruption and his firm is going to fund a new generation of Oracle-killers.

Ellison has already launched a volley with his comments to the Journal that the HP board needed to “resign en masse.” Andreessen– you gonna take that? (Please say no.)