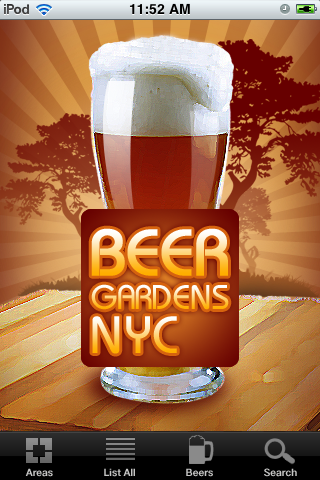 It’s October 1, which means that you’re average American think Oktoberfest has started. Not true: Munich’s Oktoberfest begins in mid to late September and lasts through October. A minor technicality if all you’re looking to do is celebrate the holiday best known for, well, bier and busen. In any event, there’s a handy iOS App that was just released that can help New York City folk find Oktoberfest beer gardens. It’s called Beer Gardens NYC [iTunes link], and it works quite well.

What does it do? It has some 50 city beer gardens organized by borough, price range, and beer selection and price. Fancy a Berliner Wieser? Then make your way to the Lederhosen German Wurst & Bierhaus in the West Village. Or perhaps you want a Bayerischer Bahnhof Berliner Weisse? The Radegast Hall & Biergarten on N 3rd Street in Brooklyn is where you’ll want to go.

Maps, photos, and directions are provided, as you might expect.

And of course, the App doesn’t all of a sudden stop working once Oktoberfest ends on the 4th. Nope, many of the beer gardens in New York City are open year-round (or at least close to it), so once November rolls around you’ll still be able to use the App effectively.

Beer Gardens NYC can be downloaded from the App Store right now, and it’s only $1.99.