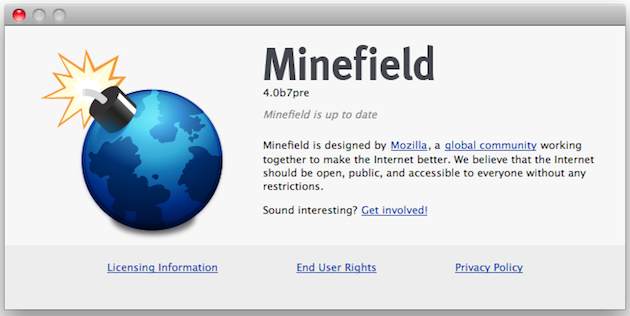 Minefield is the name given to nightly builds of Firefox

Much love has been thrown in Google Chrome’s direction of late, not least of which because, well, it’s quite snappy. But let’s not forget the trailblazing browser that helped open the door for all these non-Internet Explorer browsers: Firefox! Yes, Mozilla is closing in on version 4.0 (I’ve been running the betas for some time now, and I’m a fan of the new Mac interface, while the Windows one looks sorta weird in Aero), and now Mac users have a rather specific reason to be excited: hardware acceleration.

The next beta, Firefox 4.0 b7, may, just may, include hardware acceleration. If not, then we’ll have to be waiting a while since b7 is when “feature freeze” kicks in.

But, these are concerns for another day, if and when hardware acceleration makes its way into Firefox 4.0 proper.