Channel surfing may not be the most social experience, but as anyone who has watched their Twitter stream during a broadcast of Mad Men, Lost, or Jersey Shore can attest to, it sure is fun to chat with your friends online about what just happened in the latest episode of your favorite show. yap.TV is a new startup launching today with an application for the iPad that wants to be the platform for this kind of conversation — a central place where you can chat with your friends about current television content. You can grab the application here.

The free application just hit the App Store, and it looks great — which doesn’t come as a huge surprise because the yap.TV team includes some former Apple employees who worked on the iPad. After firing up the app, you’ll see what’s essentially an interactive TV Guide, which lets you scroll through the day’s TV listings by flicking your finger a few times. While this is pretty handy, yap.TV’s real potential lies in its social features. 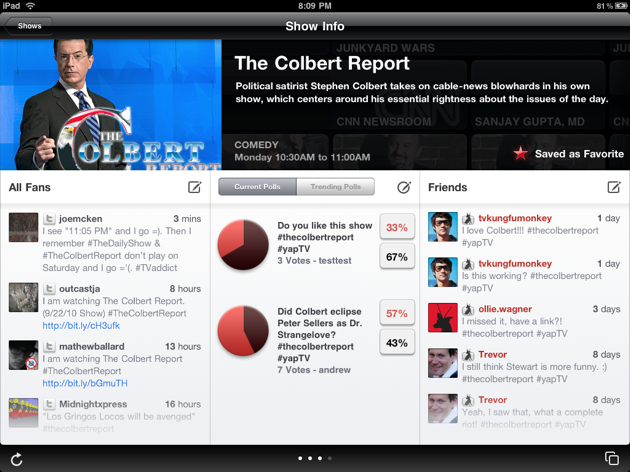 After tapping on a show, you’ll see a set of columns, each of which features a different stream (it’s a bit like TweetDeck in this regard, though I think yap.TV looks nicer). In one column you’ll see a feed of all recent tweets related to the show you’re watching. In another, you’ll see a set of polls that other yap.TV members have asked you to participate in. There’s also a column for so-called living rooms — private, invite-only chat rooms where you can discuss the current episode with your friends. You can change the order of the columns, and you can have multiple ‘Living rooms’ open at once.

One obvious issue with yap.TV is spoilers — it isn’t unusual for people to tweet about major plot points, which can screw things up if you’re on the West coast or anywhere else with a time delay. To counter this, yap.TV has built a system (patent pending) that filters tweets by time zone to help ensure that this doesn’t happen.

yap.TV is also getting a boost from one of Silicon Valley’s most famous personalities: Apple cofounder Steve Wozniak. Wozniak is a yap.TV advisor, and he will help give it a shove in the right direction this Thursday, when he’s making a guest appearance on The Big Bang Theory. Woz will be talking about the episode in real-time using yap.TV as the episode is broadcast.

There are already a few competitors that are trying to making your TV-watching experience more social, including Comcast’s Tunerfish, which invites users to ‘check-in’ when they’re watching a show.