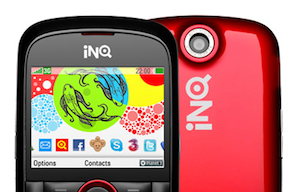 First, we broke the story about the project. Then Facebook PR officially denied it, saying our story was “not accurate.” Naturally, they were arguing semantics, as we suspected, and other reports about such a project quickly followed. This led to a sit down with CEO Mark Zuckerberg, during which he acknowledged that our leak was “probably accurate.”

Okay fine, misunderstanding, miscommunication, whatever. But tonight brings another new report about the project. This time, Bloomberg is reporting that Facebook is working with INQ Mobile on two smartphones that will first hit Europe, and then come to the U.S. to potentially be sold through AT&T. These phones are believed to run on Google’s Android operating system, but likely a modified version with deeper Facebook integration.

But here’s what’s weird about this. When Facebook PR denied our original story, they noted that the high profile employees Joe Hewitt and Matthew Papakipos were likely working on other projects like Connect for the iPhone and the INQ1 phone — the first INQ phone with some Facebook integration. In my follow-up, I noted that the idea that two of the key architects for Firefox and Chrome OS (Hewitt and Papakipos, respectively) were working on something like the INQ phone was humorous. And in his sit down with us, Zuckerberg seemed to agree:

[…] different people come to us with different ideas all the time, and we mentioned the example of the INQ phone in the past, and I think you appropriately said that it isn’t some massive big thing, and the reality is we don’t think it is a massive big thing either, but it is cool and actually a lot of people bought it.

Interestingly, a lot of this stuff, we don’t even do the engineering work. The INQ phone, I don’t think we had any engineers work on it.

We’ve been working with INQ for a couple of years now to help them build a deeply integrated Facebook experience on their devices.

So if it’s not engineers, which team exactly is working with INQ on these phones? Just the marketing department? Just the team that does deals?

Or perhaps Zuckerberg was just refering to the INQ1, and these newer INQ phones will be different — but it sure doesn’t sound like that.