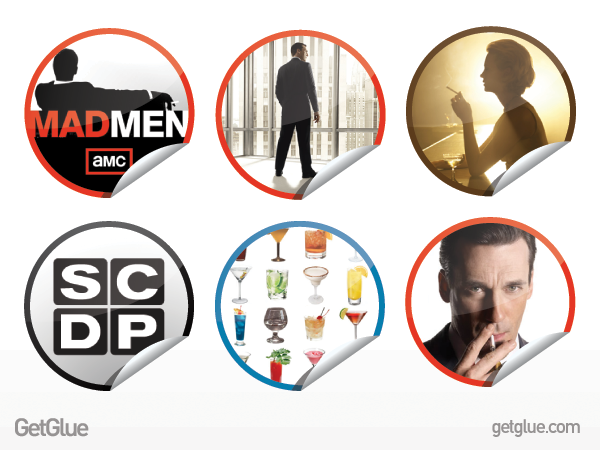 Back in July, when writing about GetGlue’s partnership with HBO, I told CEO Alex Iskold that if they struck a deal to get Mad Men stickers from AMC, I’d be on board. Well, he went out and did just that. So here I am, loading up GetGlue.

And AMC is hardly the only new partner that GetGlue is announcing today. Disney, HGTV, Discovery, and, in what may be a first for news programming, MSNBC is on board as well. Each of these companies will now have special stickers that users can accumulate when they check-in watching any of their shows.

To be honest, it’s surprising how many big name networks and studios are jumping on board with this idea, which, on the face of it, sounds a little silly. But the key isn’t really the stickers — they’re just a lure for some users. The key is the metrics behind them. And GetGlue is quickly building those up.

The service had 8 million unique ratings and check-ins during the month of August, Iskold says. And they now have over 600,000 users on GetGlue — a number which has seen 20x growth in 2010. “Social TV as a market is moving very rapidly,” Iskold says. Rivals Miso, Clicker, Philo, and Tunerfish undoubtedly agree.

But anyway, back to the important thing here: the Mad Men stickers. On top of the regular show sticker you’ll get when you check-in watching the show, GetGlue also has five other “hidden” Mad Men stickers (above) that you can unlock by checking-in and writing a certain phrase. I’ll give you one of them. If you check-in with the phrase “I want to be Don Draper” or “I want Don Draper” (depending on your preference, of course), you’ll unlock a special Draper sticker.

GetGlue has been doing these types of hidden stickers for some time now to reward true fans of various shows. Each of these is unlocked with a phrase or word that real fans are likely to utter at some point when using GetGlue. “It’s fun and it’s designed to prove that you’re a true fan,” Iskold says.

And true fans are proving to be valuable to the network partners as well. For example, certain stickers for certain shows you can only earn when that show is being aired live. This obviously entices people to watch the shows with commercials, but it also shows who the real die-hards are. Again, this is all about metrics.

Another cool partnership GetGlue is doing is with Disney for the upcoming Tron: Legacy film. There are three different stickers you can earn depending on if you check-in watching the trailer, see the movie on opening weekend, or see the movie in the first 30 days of it opening. Again, this can help entice users to see the movie early — and even often.