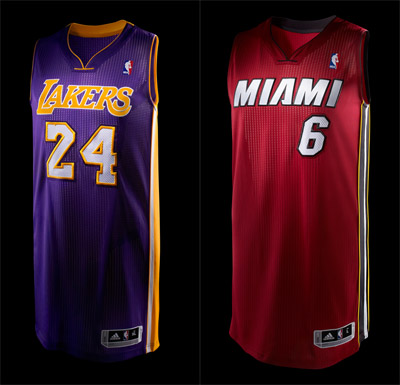 Looks like some of the technological advancements adidas brought to the World Cup (and have since moved into the domestic leagues… see Alexandre Pato wearing that TechFit kit) are starting to make their way into American sports. The company announced earlier today the release of NBA Revolution 30, the “lightest and most technologically advanced” NBA uniforms ever. That means when the Knicks go 0-82 this year they’ll at least be looking good.

Unlike in world soccer, where adidas competes with the likes of Nike, Puma, Umbro, Joma and so on for the rights to make each team’s kits, adidas has the exclusive rights to NBA jerseys. That means every team in the NBA, from Boston to Los Angeles, from Miami to Portland, will be wearing the new jerseys.

What makes the jersey special? It utilizes Formotion, the tech that helps reduce friction between skin and fabric. That means the jersey is less prone to clinging to your leg as you run down the court.

Then there’s Climacool, which attempts to keep heat away from your body (I’m gonna keep saying “your” for the sake of convenience); the jersey dries up to twice as fast as previous jerseys.

Add in TechFit and PowerWeb and you’ve got yourself one fairly tricked out jersey. Oh, and they’re made of 60 percent recycled materials. Nice.

Adidas has been working with the league for the past four years developing the NBA Revolution 30, so it’s not like adidas came up with this during a long weekend.