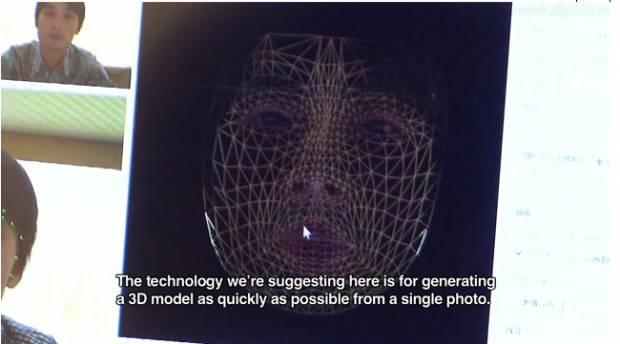 I am well aware that this piece of technology isn’t the first of its kind, but this new system [JP] that converts 2D photos of faces into 3D models looks quite powerful. According to its makers, two researchers from Japan’s Waseda University, the 2D pictures are converted in just 1.2 seconds and require nothing but a conventional web camera.

That being said, the results do get better when SLR cameras are being used to make a picture of a face. In any case, range scanners and other equipment used for similar systems, isn’t needed.

The method is based on a database of 3D face models of 1,000 people. When analyzing a picture, the system compares certain “feature points” (characteristic elements) with those of the face pictures stored in the database and almost instantly creates the 3D model.

The makers say this technology could be used in video game production, for example to integrate the faces of players themselves into 3D games in a simple way.

This video shot by our friends at DigInfonews in Tokyo provides more insight: