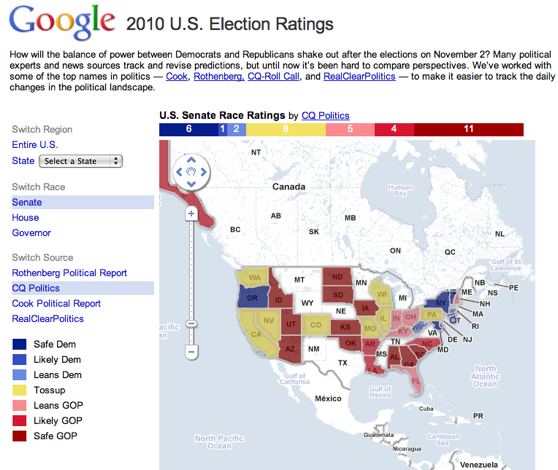 Google has consistently offered consumers useful ways to interact with election and politics online including “In Quotes,” maps of where to vote, and town hall meetings on YouTube. Today, the search giant is helping you see where the balance of power lies between Republicans and Democrats in the House, Senate and Governor races across the U.S.

As midterm elections draws near (Nov. 2), Google has published an interactive map that tracks blues and reds across the the 500 seats up for grabs in the U.S. Google is mashing up data from various political publications, including Cook, Rothenberg, CQ-Roll Call and RealClearPolitics.

You can filter information by state, type of race (senate, governor, house), and by source. For example, for California, Rothenberg Political Report indicates that the governor election is a toss-up and slight tilt towards the GOP. Google says that data is refreshed daily based on the latest ratings from the publications. You can also embed maps as a gadget, which is powered by Fusion Tables.