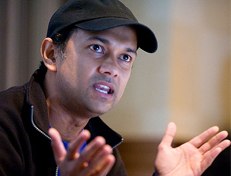 What is it about doing video interviews with me that makes VCs start swearing? Dave McClure, David Hornik, Fred Wilson and now Redpoint’s Satish Dharmaraj. OK, in most of these cases, I’m the one who starts the swearing, but still, I have a feeling most people don’t have to put “NSFW” on this many posts about wonky old venture capital. I’m thinking about just renaming the show “Fuck You Money.”

Appropriately, the theme was “assholes” on this week’s “Ask a VC.” We talked about Fred Wilson’s hope that the industry weed out the assholes and asshole-ish VC behavior that Dharmaraj refuses to engage in now that he’s moved from the entrepreneur side of the table to the VC side of the table. We also talked about his angel investing in India– and why Redpoint as a firm doesn’t invest there. We talk about what the role for business people is in a engineer-obsessed Valley. We talk about why VCs rely on their networks for deal flow and why that’s not quite as well, asshole-ish, as you might think. And we talk about the diminishing importance of patents. There’s some swearing in that segment too.

Next week, our guest is Josh Kopelman, the original Super Angel. Send your questions to askavc(at)techcrunch(dot)com.