Love it or hate it (you can consider me to be part of the latter group), “follow Friday” is here to stay. In case you’re not familiar with the term, you’ve probably never ever looked at Twitter on a Friday or because you’ve only been using the service for a couple of seconds.

Basically, on Fridays, a lot of users recommend their followers some other people to follow on Twitter, usually appending the hashtag #ff or #followfriday to their tweets.

Think of it as Twitter’s recently launched ‘who to follow’ recommendation engine, only driven by regular users rather than algorithmically.

Enter FollowFriday.com, which launched recently and is basically a site ranking “tweeps” (people formerly known as Twitter users) based on how many #followfriday recommendations they’ve received on the micro-sharing service.

Rankings can be looked at by country and language – supported languages are English, Spanish, German, French, Japanese and Italian. Unsurprisingly, there’s also a celebrity ranking.

The FollowFriday.com ranking mechanism monitors tweets from the entire world that include one of these hashtags: #ff, #followfriday, #cuate, #sigueelviernes and #vivaviernes. The system counts all tweets sent between Thursday 12:00 GMT and Saturday 12:00 GMT, in order to monitor all featured countries.

Users who sign up for FollowFriday.com get a personal profile (MyFF) where they can consult their own FollowFriday history. It also boasts a recommendation management tool where they can check who recommends them, whom they’ve recommended and automatically thank all of them or create custom Twitter lists in only a couple of clicks.

Note that it takes a while to compute, up to 24 hours, after you register (which you can do with your Twitter account).

The people who cooked up FollowFriday.com (equipo24) tell me there are a set of ranking rules in place that penalize users who abuse the #followfriday hashtag. The company also says it’s working together with Twitter and sending them weekly spam reports.

FollowFriday.com, a mere month after launching quietly, says it is already tracking more than 5 million users who actively participate in “FollowFridays” in its database, which has prompted them to create a – pretty decent – Twitter user search engine to help people find users worth following.

You can search by keywords in the user name, bio or location fields and apply several filters such as the number of followers, tweets per day ratio, if they have a customized avatar, etc. You can also order the results by different criteria, including their “FollowFriday Score”.

FollowFriday.com is part of the e24Apps Network, a network of Twitter apps mainly focused on helping users find and follow “quality users”.

Oh, and don’t forget to #ff @TechCrunch while you’re at it. 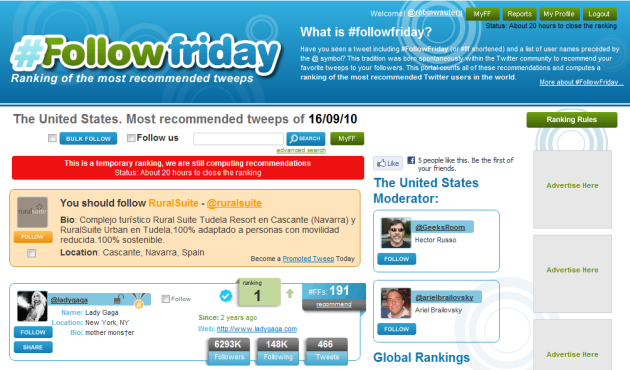