Zazuba, operating currently out of Washington D.C. is a way to book online appointments for everything from manicures to meditation to dog grooming. An “OpenTable for everything else,” Zazuba works primarily by providing businesses with a web based appointment manager and booking widget for their own sites, ultimately aggregating the data on Zazuba.com.

Unlike distributed booking companies like Libersy, Genbook and Bookfresh, Zazuba does it gratis, for both businesses and the end consumer. Like OpenTable, customers can book appointments by service category, price or reviews. And there’s a Zazuba mobile app for those who need a manicure like now.

Zazuba’s business model is Cost Per Action/Cost Per Click, with businesses paying to be at the top of search results for certain services. What’s nifty about this is that since actual booking of appointments (i.e. direct revenue) goes through the service, advertisers get a super accurate sense of ROI, without having to go through any grunt work like manually slogging through data and comparing conversions.

Says founder Michael Buckwald, “Ultimately, we think online local advertising is being held back by the general lack of an ability to book online and as a consequence the inability for local advertisers to develop metrics around their local ad campaigns.”

Zazuba launched four weeks ago and is currently only available in the Washington DC area. While limited in coverage, the site currently has over 50 businesses signed up and Buckwald says that those businesses are each taking in several thousand appointments a month, “Significantly faster growth than OpenTable or Craigslist four weeks after launch in DC.”

Zazuba is built on an API, so interested web and mobile developers can have their way with its appointments interface.

“Siri could actually make a haircut appointment for you rather than just telling you about places nearby and Groupon could let you book an appointment to redeem a Groupon from their site rather than inundating a receptionist with a thousand calls.”

Pretty forward thinking for a startup so far from Silicon Valley. 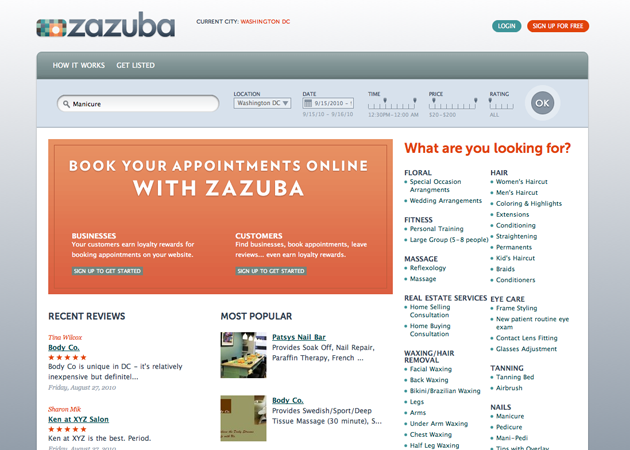 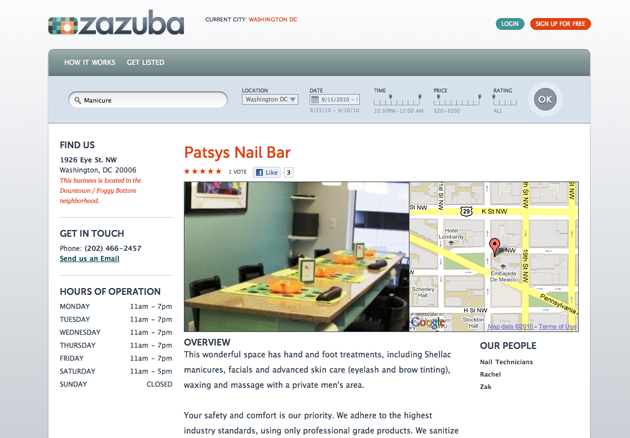