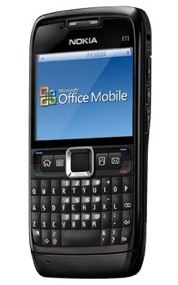 Against a backdrop of Nokia-blue screens, the company’s head of markets Niklas Savander tried to command the stage on Tuesday morning at London’s ExCel center. He was no Steve Jobs, opting for a conservative khaki suit and bungling a few words, but at the end of his opening address, he tried to deliver his last line with gusto: “Today is all about here and now, it’s about three words: Nokia is back.” Although seemingly sincere, these are strange words for a company that seems anything but “back.”

“In turmoil” is a more fitting description.

“The question analysts are asking is: ‘Where does Nokia sit in the four stages of bereavement?’ Is it denial?” asks Benedict Evans, a consultant for Enders Analysis in London. “Or have they finally come to realize that Apple’s product is indeed better.”

In rapid succession, the company has ousted its CEO, 30-year Nokia veteran Olli-Pekka Kallasvuo, appointed a new CEO, Stephen Elop, a Microsoft executive from the enterprise software side, and seen the departure of Anssi Vanjoki, head of mobile solutions and one-time CEO candidate. And there’s no sign that the reorganization is over. Early Tuesday, the company’s chairman, Jorma Ollila confirmed his 2012 resignation.

The body pile in Espoo, Finland is a clear sign that the hardware-centric company, which has perfected the art of the $15 cell phone but not the $300 smartphone, is not only reshuffling the deck chairs but tinkering with its very DNA. Nokia is only sustainable at its current size if it can become a legitimate player in the competitive, software-heavy, smartphone market and go head-to-head with Google’s Android operating system and Apple’s iOS (two rivals Savander evoked repeatedly in his address). They will need a little help.

Redmond To The Rescue?

That help may come from Redmond. Several months ago, Microsoft and Nokia were engaged in takeover discussions, according to a source familiar with the talks, who did not want to be named to avoid upsetting Nokia and Microsoft executives. Rumors that Nokia is a takeover target are not exactly new. Earlier this summer, the stock saw a brief pop after a local Finnish paper Kauppalehti said Microsoft, Google and Cisco were all potential bidders. There have also been whispers of Intel, Nokia’s partner in the high-end MeeGo operating system, briefly looking under Nokia’s hood earlier this year. But the prospect of Microsoft and Nokia linking up is an interesting one— it’s difficult to imagine Microsoft hurling itself into the incongruous business of cheap cell phones but the duo (aside from RIM) have the most to lose by the rise of Apple and Google.

The analyst community is skeptical that a full-on Microsoft-Nokia takeover is still in the works. Of four analysts surveyed by TechCrunch, none saw it as the most likely outcome. Describing Nokia as currently locked in a “death spiral, just loaded with challenges,” senior Needham analyst, Charles Wolf says “It would be a disaster. Ballmer [(Microsoft’s CEO)] is not the brightest bulb… but I don’t think Ballmer is dumb enough to do it.”

Ultimately, Microsoft may not meet Nokia at the altar, but growing evidence is pointing towards a stronger alignment between the two companies.

Momentum has certainly been building in that direction. In August 2009, the companies announced a joint partnership to develop and market Microsoft enterprise apps for Symbian. The first of those apps, the MS Office Communicator, debuted in May.

Furthermore, while there was some takeover talk, over the past year many of Nokia and Microsoft’s “lengthy” discussions have centered on smaller, strategic partnerships and investments, according to sources briefed on the discussions.

Despite the outward fanfare, a source says Nokia started to look for partners late last year when they realized that Symbian, and specifically its Ovi store and services, would struggle to take off. Nokia courted companies like Microsoft and Yahoo— leading to Yahoo and Nokia’s May announcement of project Nike, a global launch of co-branded services with a focus on e-mail and maps. Meanwhile, with Microsoft, there was significant back and forth on several key issues, including:

– whether Microsoft would take Navteq off Nokia’s hands (the $8.1 billion purchase has been somewhat accretive to Nokia’s earnings but many believe it has fallen short strategically; meanwhile, Microsoft has been rumored to be shopping around for mapping solutions)

-and the possibility of deeper integration with Bing services, like Bing maps, on Nokia’s phones (potentially sharing local search revenues). 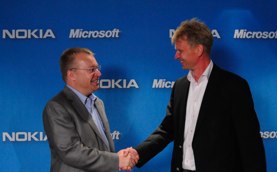 Some of these issues may still be in play, or perhaps revisited, with Elop’s highly anticipated arrival next week. Elop himself is an interesting choice for Nokia. In Ballmer’s September 9 e-mail to employees, he touted Elop’s contribution and emphasized the company’s relationship with the Finnish handset maker, “I appreciate the way that Stephen has been a good steward of the brand and business…and look forward to continuing to work with him in his new role at Nokia.”

While one could interpret Elop’s departure as a loss for Microsoft, given how Nokia poached a key executive, the situation seems uncharacteristically amicable. According to a source plugged into the machinations of Redmond’s top brass, Elop’s move to become the CEO of a major technology company (i.e. possible competitor) was notable because there was no rush to physically push him off Microsoft’s campus. Although technically stripped of his title, Elop was allowed to linger. Typically, when a senior Microsoft executive leaves for another tech company, the end is far more abrupt. When asked for comment, Microsoft simply referred to an 8-k filing which noted that Elop’s last day was technically September 10.

However, the most telling smoke signal here could be basic necessity. Many analysts believe Nokia and Microsoft desperately need some thing or some close partner, to aggressively compete in the high-margin smartphone market.

Nokia’s stock has been hammered by its failure to gain real traction in the high-end segment. Its US listed shares have tumbled to just under $10 a share as of Wednesday morning trading— from an all-time high of more than $60 back in June 2000. Furthermore, although Nokia proudly waves the number “260,000,” the number of Nokia smartphones sold per day according to the company, the figure distorts reality.

There is no question that Nokia is scrambling to defend its market share. On the high-end it’s dwarfed by RIM, Google and Apple in the United States— Symbian only captured 2% of the smartphone market in the first quarter, according to Nielsen. In Asia and Europe, Android is starting to eat its lunch in the mid-market by offering attractive phones in the $100-$150 price point. And then there’s the ongoing fight to get developers on the Symbian platform. This summer, Android’s stronger than expected gains eventually pushed Nokia to issue a downward revision to its full year outlook— the firm warns that margins may come in below the 11-13% range and the company now expects a decline in their value market share. That’s a fierce downdraft. Or, as analyst Mats Nystrom says, “with the value in software, the industry has already changed… Nokia is now brutally forced to change.”

“You have a whole organization centered around hardware, they’re like a deer in headlights,” Needham’s Wolf says.

Meanwhile, on Microsoft’s end, there is mirrored battle for relevancy.

According to Accel Partner Richard Wong, the upcoming Windows Phone 7 launch is largely seen as their last stand to really matter in the smartphone category. “Nokia and Microsoft could collaborate in a way that was inconceivable 7 years ago,” Wong says, “I could imagine a deeper partnership, cross investment or a deal to drive Bing services on Nokia devices.” For all its problems, Nokia is still the biggest handset maker in the world. A tighter integration would help Microsoft get its services— and perhaps Windows 7— into the hands of millions of more customers.

Of course, that’s assuming that any partnership is tied to strong execution, something both companies have lacked in the mobile department (see: Kin). For all this potential and the what ifs that must be dancing in Elop’s head, they are two gigantic companies that have yet to crack the code on smartphone innovation. Slamming their heads together may not generate the desired results. Or, as Evans at Enders warns, “Two dinosaurs don’t produce a mammal, they produce a dinosaur.”