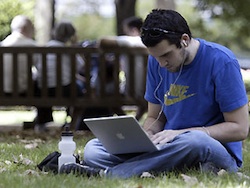 The City of New York giveth, and it taketh away. On this fine morning when we discover that there’s a proposal to ban smoking from all city parks and beaches we also discover that city parks will be gaining Wi-Fi access points, courtesy of Time Warner and Cablevision, the two big local cable companies. Well, not really “courtesy of,” since there’s a whole bunch of caveats attached to the deal. First thought: we’re about five years past the point where municipal Wi-Fi could be considered “neat.”

The big catch is that Wi-Fi access, while available to the public free of charge, will only be usable for up to 30 minutes per person. (That’s up to three, 10-minute sessions.) It’s almost like, gee, thanks for nothing.

Oh, sure, you can use the access point past that 30-minute mark, but it’ll cost you 99 cents a day after that.

Then again, the value of such a Wi-Fi system is somewhat less than it would have been in, say, 2004 or 2005. You have to figure that a good portion of the people out there have phones with Internet access. No need to walk up to Central Park (or wherever) just to check your Twitter feed.