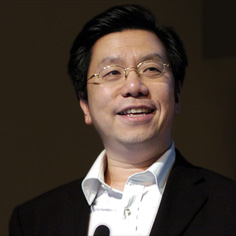 What? Then why does he have an incubator here?

To be fair, Lee is bullish on what he calls “micro-innovation” or what we’d call rapid iteration in the Web 2.0 world. He draws a distinction between Facebook and Chinese Web giant Tencent and Apple/Google, saying Facebook and Tencent took ideas from others and iterated on them, while Apple and Google were huge innovations.

I’m not sure I see the distinction. Apple back in the day was obviously hugely innovative. But more recently, Apple returns are driven by two things it didn’t invent: MP3 players and smart phones. Apple iterated on them and, through design, created amazing products. Search, too, was an existing category Google made better. What’s more: Many people would argue the big innovation at Google was the paid-search business model, which was invented by Overture.

Now let’s look at Facebook. Yes, social networks weren’t new, but I’d argue the way Facebook developed its social network was every bit as distinct as how Apple iterated on the MP3 player and Google iterated on the search engine. The news feed and connect were hugely innovative– so innovative they terrified people. You can argue a search algorithm or designing a phone is a harder technical problem, but that seems an order of magnitude, not a fundamental difference of “innovative” versus “not innovative.”

As for the educational system, it’s an important point, as many say the Chinese educational system is based on rote learning, not thinking. But so are a lot of countries, and immigrants–educated in those countries–have been some of the biggest innovators during the golden age of Silicon Valley.

I worry sometimes that people in other countries put Silicon Valley on a pedestal. Living in Silicon Valley can absolutely help you build an idea into a company thanks to its much famed ecosystem. I think living among entrepreneurs pushes people to quit a job and follow their dreams. But there’s nothing magic about it. Great entrepreneurs are everywhere and in today’s world capital is flowing all over the world to find them. I find it hard to believe there’s not one Steve Jobs in all of China for the next fifty years.

China has another edge too: It makes things. I’m a big believer in the theory that that’s where a lot of fundamental American innovation came from, and that it’s something America has lost in the great globalized “knowledge-economy” age. When you make things, you see how they work… and how they could work a lot better.