Gilt City, luxury e-tailer Gilt Groupe’s foray into local deals, has been quietly expanding in beta across the country in the past month or so, as we have written about here and here. Today, the flash local deals site officially launches initiatives in Boston, Chicago and Miami (in addition to New York, SF, and LA, where it’s already live).

While in the same social shopping space as Groupon, Gilt City’s deals go live no matter how many people opt in. And while Gilt itself cultivates an air of exclusivity and is semi-invitation only, Gilt City is open to all. Another difference between Gilt City and Groupon? Gilt City promotes three or more sales in each city, which are live for about a week or until the supplies run out.

But like Groupon, it seems as though Gilt Groupe has its sights set on world domination with Gilt City.“We’re starting in local markets where the Gilt brand is already established and in the near-term we anticipate expanding to markets that match the Gilt experiential model,” says president Nate Richardson.

Gilt City is inaugurating its official launch with deals on VIP Dreamgirls theatre tickets in San Francisco, Chicago Bulls viewing tickets in Chicago, Bumble and Bumble salon discounts in New York and so on and so forth (a paddleboard tour! in Miami). Gilt City is also holding a Facebook contest in each launch city where fans can win dinner for two at various restaurants, including Spruce here in S.F.

Gilt has room to grow, having recently raised $83 million in funding, most recently $35 million last May. Future plans include a Gilt City iPhone app and increased sales analytics tracking for Gilt City vendors. 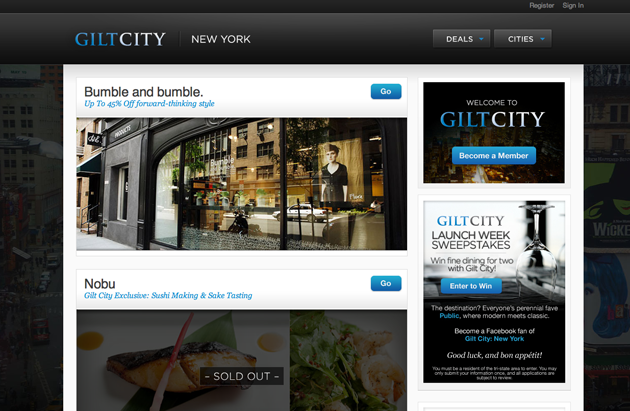