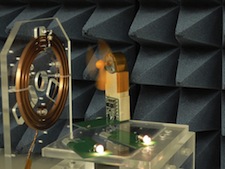 While there’s been other attempts to create a truly convenient wireless charging solution, not all of them have been successful. Most require that your device be in physical contact with a charging station, which while more convenient then plugging a device in, can still be a pain to remember. Fujitsu is working on a system that doesn’t require a physical connection at all, and it looks like they may have been successful.

Fujitsu announced today that they have developed a system that works completely wirelessly, using a magnetic resonance method that will simultaneously charge multiple devices without requiring them to be in contact with anything. Fujitsu also reports that this new method will charge a device in 1/150th of the time previously required, meaning it may also be more efficient. Details are still sketchy at this time, but assuming the voltage requirements aren’t out of this world, the potential here is huge.