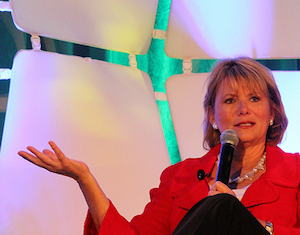 The Chinese aren’t exactly prone to emotional outbursts in front of Western reporters. In China, if you insult a business partner in the press, there’s likely a calculating reason behind it.

Witness the latest volley by Alibaba.com’s CEO David Wei towards Yahoo, which owns 40% of the parent company for his Chinese ecommerce powerhouse. “Why do we need a financial investor with no business synergy or technology?” Wei said to Bloomberg on Friday.

Indeed, the idea that Yahoo and Alibaba have a “strategic partnership” has been stretched pretty thin since those days back in 2005 when Jerry Yang and Alibaba founder Jack Ma walked the grounds of Pebble Beach and negotiated a deal by which a small Alibaba would take over Yahoo China, in exchange for Yahoo getting 40% of the Alibaba Group. But now, without its own search engine, any idea that Yahoo would give Alibaba a strategic advantage is laughable, Wei said.

It’s not the first time Wei & Co. have mouthed off to the press about their largest shareholder: Eight months ago Alibaba executives called Yahoo “reckless” for backing Google in its fight with the Chinese government. Meanwhile, Yahoo has criticized Alibaba for Yahoo’s plummeting search marketshare in China, publicly flirting with the idea of selling the property off.

What’s going on behind the scenes? In short, Jack Ma wants Yahoo out of his company, but Yahoo knows it would be crazy to sell before two of the most lucrative divisions of Alibaba, Taobao and Alipay, go public. And according to several sources close to both companies Carol Bartz is making a tense situation worse. Bartz has been widely criticized for Yahoo’s lack of stock appreciation, revenue or traffic growth during her almost two-year tenure as Yahoo CEO. But if things continue on this course, business professors may look back at see her biggest failing was squandering the relationship with Alibaba.

First some background: The Alibaba deal allowed Yahoo to moonwalk away from the kinds of thorny censorship issues Google and other US properties have had to deal with in China and still profit off the country’s runaway Internet growth. Alibaba spun off Alibaba.com into a $10 billion (77.69bn HKD) public company, and has two phenomena in the wings: Taobao, an eBay-like marketplace with 170 million users, that dominates 80% of China’s ecommerce market, according to several reports. Taobao’s marketplace is already 70% the size of eBay and is growing at a clip of 70% a year. Then there’s Alipay, which is the PayPal equivalent in the country, with over 300 million users and annual growth of nearly 100% per year. Alipay’s annual transaction run-rate is a staggering $64 billion. Stifel, Nicolaus & Co. estimate that Taobao could be worth another $10 billion and Alipay could be worth nearly $5 billion.

Of course none of these businesses has much to do with Yahoo’s core business, and Yahoo China has withered away amid Alibaba, Taobao and Alipay’s success. Even before Yahoo got out of search, there was little real strategic relationship between them but it was one hell of a lucky move, financially speaking. Say what you want about Yang’s tenure as CEO, he excelled at managing the relationship with Ma, and is still on the board of Alibaba Group. Whether savvy or blind-luck, the deal is also helping keep Yahoo’s stock afloat five years later. Research firm Stifel, Nicolaus & Co. says that as much as 85% of Yahoo’s stock price is attributed to the value of Yahoo! Japan and Alibaba, going so far as to call Yahoo an Asian Internet play…. that also has a US business.

By some analyst accounts, the Asia business is the one area where Yahoo is killing its Valley competition. So you’d think that Bartz would be bending over backwards to make sure the relationship is going well, right? Wrong. Sources close to Yahoo and Alibaba say that when Bartz entered the job two years ago, she didn’t reach out to Ma or Wei and when Ma finally came to Sunnyvale to meet with her, she dressed him down in front of his management team criticizing what Alibaba had done with Yahoo’s China portal. Said one person close to the Alibaba side of things, “She displayed the diplomatic skills of a donkey.”

Forgive the mixing of animal metaphors, but that’s called strangling the golden goose. Bartz was hired to be the “anti-Jerry” – direct, decisive and not mincing words. I’d argue that’s what the coddled, complacent US operations of Yahoo needed. But hard-charging, successful Alibaba didn’t need a lecture from a party they already resented giving such a sweetheart deal to five years ago. You think Bartz can be untactful on stage with Michael Arrington? Imagine her in a delicate Chinese negotiation. Yowza.

It’s led to an ugly marriage between the two—which has become more evident as Alibaba’s team continues to speak out about the lack of strategic value to the relationship. It’s clear Ma wants the relationship severed, and it’s increasingly coming up in Yahoo’s meeting with Wall Street analysts. The more Bartz angers the Alibaba team and criticizes the Chinese government, the more ammo she gives Ma to drive a wedge between the two and even potentially force a sale if it’s deemed to be a poisoned relationship. It’s not too late to wake up, lavish praise on Ma –whether it’s genuine or not– and focus on the US business.

For Yahoo’s part, it has told analysts the tax hit it’d take on the transaction is the biggest barrier, but considering how much of Bartz’ compensation is tied up in boosting that stock price and how much of that stock price is being kept afloat by Alibaba, I can’t imagine tax implications are the only reason Yahoo is loathe to sell.

As far as Wall Street pressure to sell-or-not-to-sell, sources say there are two camps. Some buyers who bought Yahoo shares when the Microsoft takeover was in the offing, are looking for something—anything—to boost the stock from the moribund $13-range. A several-dollar-per-share dividend would be better than nothing, some Yahoo bears feel. But to most people, selling off Alibaba’s stake before Taobao and Alipay go public would be tantamount to throwing in the towel and scrapping Yahoo for parts.

It’s hard to know what Bartz is thinking here. I’ve always been a fan of her no-nonsense, no-sacred-cows style, but if she wants to keep Yahoo from being cheap takeover bait, she needs Alibaba and needs Ma. She might even- gasp!- be able to learn something about building a consumer Internet powerhouse from them. As the tension keeps growing and Alibaba executives keep sounding off, Yahoo will have to decide once and for all if it is a franchise worth saving or simply worth more split into pieces.