Taking a cue from Quora’s very engaged CEO Adam D’Angelo, Facebook founder Mark Zuckerberg recently used Facebook Questions to weigh in on the ETA for a possible Facebook IPO. Zuckerberg’s thoughtful take? That upcoming product developments might put a kibosh on a public offering this or next year, despite what some incoming employees may hope, “I tend to think that being private is better for us right now because of some of the big risks we want to take in developing new products.” 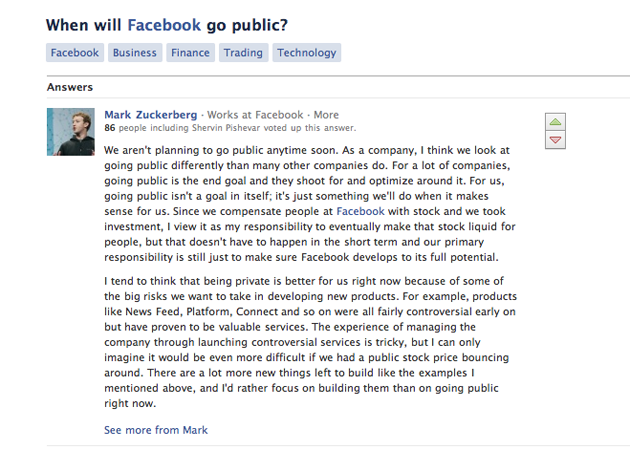 “We aren’t planning to go public anytime soon. As a company, I think we look at going public differently than many other companies do. For a lot of companies, going public is the end goal and they shoot for and optimize around it. For us, going public isn’t a goal in itself; it’s just something we’ll do when it makes sense for us. Since we compensate people at Facebook with stock and we took investment, I view it as my responsibility to eventually make that stock liquid for people, but that doesn’t have to happen in the short term and our primary responsibility is still just to make sure Facebook develops to its full potential.

I tend to think that being private is better for us right now because of some of the big risks we want to take in developing new products. For example, products like News Feed, Platform, Connect and so on were all fairly controversial early on but have proven to be valuable services. The experience of managing the company through launching controversial services is tricky, but I can only imagine it would be even more difficult if we had a public stock price bouncing around. There are a lot more new things left to build like the examples I mentioned above, and I’d rather focus on building them than on going public right now.”

Our very own Mike Arrington responded to Zuckerberg, on the same Facebook Questions page, “I remember when Steve Jobs said Apple would never build a phone.”

If what Zuckerberg’s saying is that an IPO would put too much pressure on Facebook with regards to product releases, the case of Google is also apropo, as the search company’s stock seems to have weathered the releases of controversial products like Buzz and Streetview. 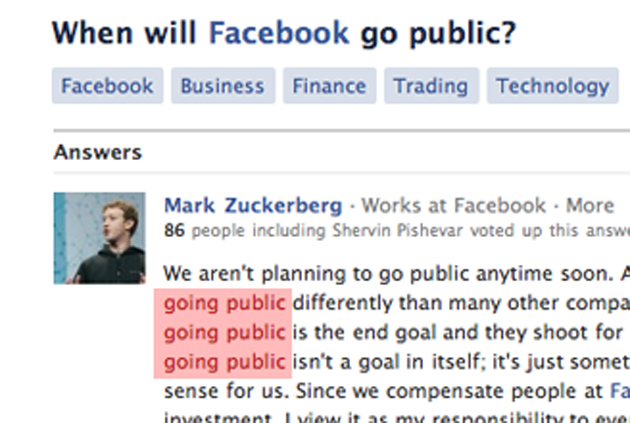