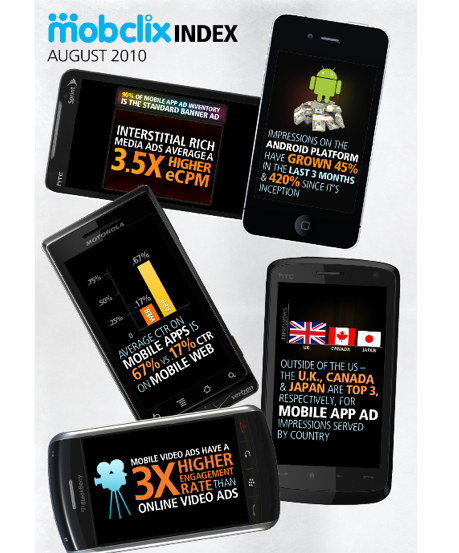 Mobile ad exchange network operator Mobclix has published its monthly infographic based on its analytics platform and advertising impressions served by the startup. While July’s report focused on iPad app, August’s infographic addresses ad impressions, CTRs and more in the network.

According to Mobclix, impressions on the Android platform have grown 45% in the last 3 months and 420 percent since the launch of the platform. This growth seems to be in line with mobile ad network Millennial Media’s reports on Android growth. Of course, Mobclix didn’t reveal the growth of iPhone impressions, which surely grew at as a fast rate as well.

In terms of click throughs, the app ecosystem trumps the mobile web, with the average CTR on mobile apps is .67 percent vs. .17 percent CTR on mobile web. The same applies for videos, with mobile video ads seeing three times higher of an engagement rate than online video ads.

While rhe U.S. market holds the #1 sport for mobile ad impressions, the U.K., Canada and Japan are Top 3, respectively, for impressions. Australia and France follow for the fourth and fifth spot.