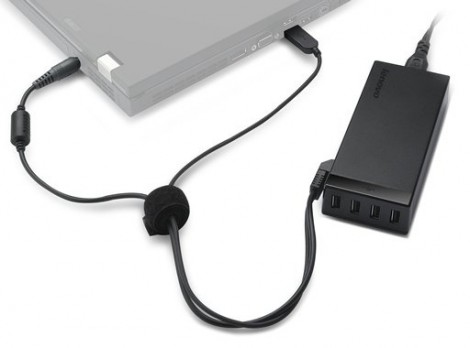 This is a pretty simple idea, though it seems to me more for your desk than for travel. Moving the power brick closer to the computer and giving it a reason to exist for the user is a good idea, but when you’re on a train or at a cafe, space is generally at a premium, and I don’t think I’d like having to find a place for this big chunk of hardware.

I’m actually surprised no companies have simply put a USB port on their power brick. If you’ve only got so many ports on your laptop, or don’t want to turn it on, or what have you, you just plug it in at the source. Lenovo’s solution either goes too far or not far enough; nobody wants that brick in view, so maybe leave it on the floor and embed the USB ports in a separate piece closer to the computer?

The point is moot, of course, if you don’t have a compatible laptop. This thing works with “90W and 65W ThinkPad laptops,” and while I’m not familiar with the power requirements and plugs used by other common laptops, it’s possible it would work with yours. Uh, I wouldn’t buy it based on that, though.

It’s still potentially useful, though at $75 you’re paying for a dubious convenience. Pick it up at the Lenovo web store.