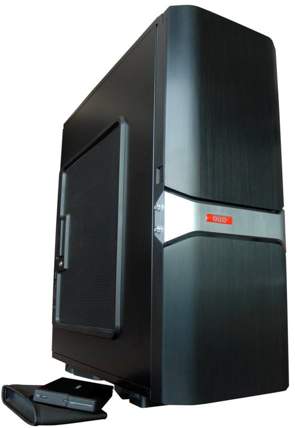 QUOComputer, a company that jumped in on the tail of the Psystar saga, is manufacturing a $3,765 Mac clone using lots of nice parts including an Asetek liquid cooling system. Why? I have no idea, but a $4K Mac clone sounds like a lawsuit waiting to happen. A $4K PC with some nice liquid cooling… yeah, I could get behind that.

Press release after the jump.

Asetek, Inc., the world’s leading supplier of liquid cooling systems for computers, announced today that its liquid cooling solutions have been chosen by QUO Computer for their latest generation of high performance, maxQ2 custom computers. QUO was created by Apple™ enthusiasts that breathe and bleed Mac OS X™. What sets QUO Computer apart is that their systems enable the user to run Mac OS X™, Linux™, and Windows 7™ natively. The maxQ2 is based on Intel’s Core i7 processor and easily handles the most demanding audio and video editing applications.

Quo Computer maxQ”QUO specializes in computers aimed at those who want the fastest, most overclockable systems without the time required to custom configure one themselves,” said QUO founder Rashantha De Silva. “We selected Asetek Liquid Coolers to deliver quiet operation plus the thermal headroom for overclocking the maxQ2 because they feature a sealed liquid loop that is reliable and eliminates customer maintenance. This is the type of elegance Apple enthusiasts treasure.”

The new QUO maxQ2 is powered by an Intel Core i7 6 Core 3.6Ghz CPU, 12GB of RAM, a 240GB SSD, a 1TB HD, and an NVIDIA 285 GTX configured to take advantage of the Adobe™ Mercury Playback Engine. The maintenance-free Asetek 550LC features an integrated pump and copper cold plate connected to a 120mm heat exchanger.

“Asetek recently demonstrated how liquid cooling can both quiet and increase the performance of an Apple Mac Pro,” said Steve Branton, Director of Marketing at Asetek. “QUO’s liquid cooled maxQ2 computers enable Mac OS X enthusiasts to get the benefits of liquid cooling in an extremely powerful computer, without the effort of retrofitting liquid cooling into an existing Mac Pro.”