TCDisrupt finalist ChompOn officially launches its major product foray into the deals space with its platform for publishers going live today. Attempting to take on the saturated deals aggregation space among competitors Yipit and 8coupons, the company offers hyper-targeted white label widgets that are drop-in on any site, which means that publishers can mix and match deals, and anyone can embed daily deals on their site.

ChompOn targets niche buying sites like the Jewish community JDeal (tagline: “You have to be meshugeh not to join”) and present at launch today is a lineup of partners including Sitepoint, Campusfood, Allmenus, Yoopra, and Stanford University. Says founder Samuel Yam, “And why should GroupOn have the monopoly on local business deals? All types of sites already have an audience to sell deals to, they just need to connect them to the right deals.”

Drawing from Yam’s background in advertising (he most notably sold AdWhirl to Admob), the crux of ChompOn platform is entirely ad networks driven, i.e. the deals aren’t stuck on your site. By adding in three lines of code, you can distribute ChompOn widgets throughout your publisher network, and ChompOn’s central analytics system will track all your data, across sites.  “Imagine as a user you’re browsing your favorite content site, and because of targeting data from other publisher sites, the current site you’re on shows you a personalized deal. That’s the aim.”

Here’s what I think is notable: Taking advantage of the fact that group buying is driven by collective behavior, ChompOn allows publishers to track deals shared over social media like Facebook and Twitter. Sites using ChompOn can now incentivize users if they shared a deal on Twitter or if they “liked” a business on Facebook. This could be a killer app for group buying, especially as the ability to share deals will only accelerate a mob mentality.

Yam explains why the world needs another daily deals site, and specifically ChompOn:

“Deals are here to stay. Lots of them. They bring in the money,and there’s no reason any one site should have a monopoly on deal inventory (as long as other sites have audiences). We’re positioning our play from an ad network background, and are providing the technology to start arbitrating and networking these deals right now across numerous properties.”

Well, someone must be making money off these things, or there wouldn’t be so many of them. 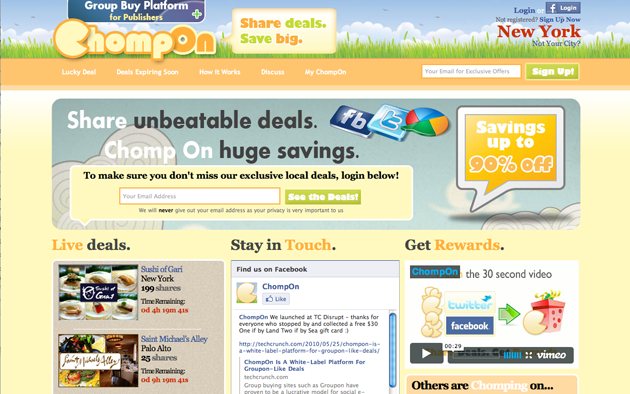