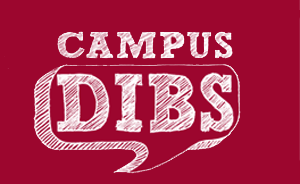 The most interesting thing about Campus Dibs, a recently launched Groupon clone, is its choice of vertical i.e. college campuses. If you don’t think this is notable enough to merit another (albeit brief) Groupon clone post then just remember how Facebook got a headstart towards world domination, by strategically targeting social networks in the Ivy League and slowly expanding outward.

Facebook has proven that colleges are hotbeds of virality in more ways than one, and thus are extremely interesting when thought of  in terms of a market for Groupon clones. If you doubt Campus Dibs’ chances for setting itself apart from the 800 or so daily deals sites out there, just imagine the power of the 50k plus populations of college campuses and alumni coupled with the mob mentality of group buying sites.

Picture briefly what a deal tie-in might mean for the student store, especially at campuses with pretty fanatical populations. I’m looking at you USC, UCLA, Penn State, Arizona State, Michigan State, OSU, and UT Austin who are among the campuses covered by Campusdibs.

Right now the USC deal (my alma mater) is “50% off Timbuk2 messenger bags and backpacks.” Perfect for back to school! But no joke, college campuses are serious business, no matter how niche they might seem. And as history has proven, no niche is too niche; Just ask Groupon CEO Andrew Mason, who once sold slippers with flashlights. Enough said.

Update: You can find a larger overview of where the niche daily deals space is heading in Samuel Rosen’s “Where Should You Start Your Groupon Clone?” 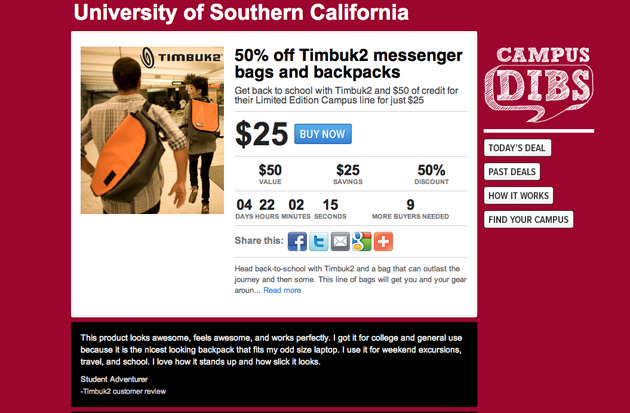 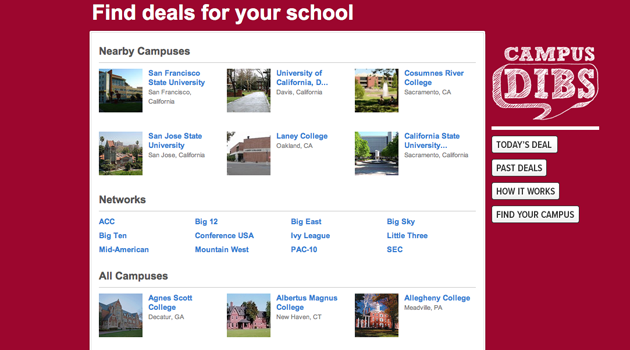