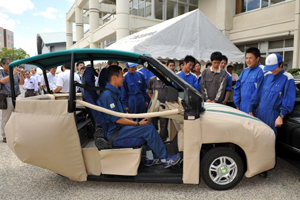 I am not sure if this is a good way to protect pedestrians, but a team of Japanese researchers developed them: airbags for use on the outside of vehicles. It may sound bizarre at first, but this is not some silly experiment. The air bags (or special car body panels, to be more exact) are the brain child of several Hiroshima-based companies and the local university.

Dubbed iSAVE (sigh…), the airbags deflate rapidly upon impact, just like conventional airbags, to soften the effects of a crash for pedestrians. The prototype car equipped with iSAVE that you can see on the pic above was shown earlier this week and is said to be the first of its kind. iSAVE can be used with electric cars only.

The research team behind the airbags says it expects to sell up to 50 units by year end for 3-wheeled cars before fully commercializing them in 2011 for four-wheeled vehicles. The iSAVE system for 4-wheeled cars will likely be priced at $17,800.

Sorry to say there’s no video available at this point (I looked everywhere).