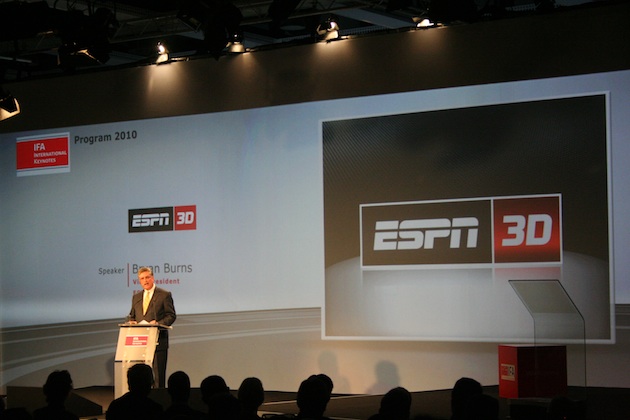 Without Sony’s support ESPN “probably would not have launched” ESPN 3D. So said Bryan Burns, Vice-President of ESPN, at IFA earlier today. Burns, talking before a reasonably crowded auditorium, reiterated ESPN’s commitment to 3D sports broadcasting while fully recognizing what we’ve all been going on about for months now: nobody’s going to buy an expensive 3D TV—have you seen the unemployment numbers of late?—when there’s nearly zero 3D content to be found.

Burns—and perhaps this is indicative of ESPN as a whole—seemingly forgot he was talking before a primarily European audience, with the 3D sports chosen to highlight including American college football and the Harlem Globetrotters. Pretty sure no one in Europe gives a toss about either of those, so why not take advantage of the fact that you’re in Europe, and show footage of the World Cup? Maybe one or two of the German goals, you know? No, let’s keep showing clips of Some College against Some Other College, that’ll keep the Europeans interested. Perhaps Sky should host a press conference in Iowa and shows scenes of a Liverpool darts competition.

ESPN, Burns noted, launched HDTV service back in 2002, and it wasn’t until enough HD content was available that its viewers began to buy HDTVs. That matters quite a bit because, on the whole, sports fans tend to be, if not the early adopters, then the trend-setters when it comes to home entertainment. Show a person a nature documentary in HD (or 3D) and you might get a polite shrug. Show that same person an NFL game or a World Cup game and they’ll say, “Now that’s awesome~!”

An interesting stat: still only 63 percent of households in the U.S. have an HDTV (and of those, 83 percent watch sports in HD). That leaves 37 percent of the households out there haven’t upgraded from their SDTV to an HDTV—perhaps they’ll skip HDTV and go straight to 3DTV? (Not at these prices, they won’t, the average price of a 3DTV currently projected to be in the $800s by 2015.)

ESPN 3D currently broadcasts to 60 million homes, including the addition of 15 or so million that will now have the channel on Time Warner. “People who have seen 3D can’t get enough of it,” said Burns, no doubt looking forward to next week’s mass in-store demo.

And since ESPN “simply cannot avoid 3D,” they’d better hope people see those 3D images and lose their minds in a giant OMG I NEED THIS flurry of excitement.