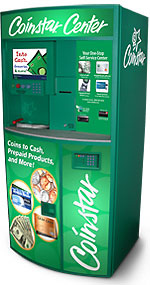 Can someone please explain this Bloomberg Businessweek story to me? I’ve read it a few times and am still having a hard time understanding what is or what isn’t being implied, or not implied, about a partnership between Coinstar and Apple.

First of all, the title is awful because most people likely don’t know that Coinstar owns Redbox (they acquired them last year), the DVD rental kiosk company. Instead, most people know Coinstar as those machines in supermarkets where you turn in your loose change for cash or silly things, like Facebook Credits. So why on Earth would they be partnering with Apple on some online venture?

Well, again, it’s about Redbox, as they sort of note in the first paragraph. But what are they going to do with Apple?

“I would not conclude we are or are not doing a streaming deal with them,” Coinstar CEO Paul Davis told Bloomberg. Well that clears things right up.

A streaming deal? While Davis notes Coinstar’s “longstanding relationship” with Apple, that’s for iTunes gift cards right now, which is an option at some of their kiosks. A streaming deal is another matter entirely, obviously.

Clearly, Coinstar (again, Redbox) wants to get into that market to be able to compete with their main rival now: Netflix. The problem with partnering with Apple is that Netflix beat them to it. Just this week, Apple unveiled their new Apple TV which has Netflix streaming built-in. Now, Netflix focuses mainly on catalog (read: older) titles, while Redbox focuses on newer titles, but that’s because Redbox is doing DVDs right now (the business Netflix is slowly moving away from). If Redbox gets into streaming, it would likely have to move more towards catalog titles as well.

Further, Apple already offers new movie releases on their own. And they actually get the majority of them before Redbox does because Redbox was forced to cave to ridiculous Hollywood studio demands that they wait 28 days before getting new release DVDs. As Apple CEO Steve Jobs pointed out a few times on stage this week, Apple gets those movies day-and-date (they day they are released for sale on DVD).

So it’s not clear to me how this possibly maybe non-partnership partnership would actually be beneficial to Apple. iTunes kiosks? Perhaps. But the article doesn’t mention that at all. It just non-talks about a streaming non-deal that may or may not be real. And may or may not make any sense. Or something.