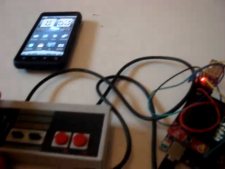 So you’ve got an emulator installed on your Android device, along with a few ROM, and you think you’re pretty cool. Well, I can pretty much bet you that [Sk3tch]’s geek-fu is better then yours. He took an NES controller, connected it to a Bluetooth module, and plays his NES on a controller, while you fumble around with your SEND and Home buttons.

[Sk3tch] took an Arduino, added a Bluetooth module, and wired an old NES controller in. He then programmed the Arduino to send the input from the controller through the bluetooth to his Android phone. [Sk3tch] calls this a work in progress, and I look forward to seeing it once it’s done and all in one neat case.