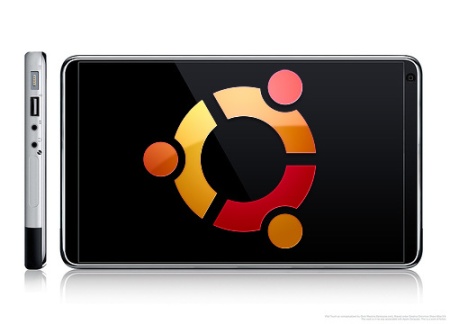 The iPod revolutionized the portable media player market. The iPhone shook up the smart phone market. The iPad is setting the standard for the revived tablet market. What is it about Apple that makes these products so great? In part it’s Apple’s dedication to user experience; but I’d argue that the larger factor in their success is Apple’s end-to-end control of the product. They make the hardware and the operating systems, and build the two to work in near-perfect synchronicity. A lot of CrunchGear commenters say they’re really waiting for a Windows 7 tablet to compete with the iPad, but I say they’ll be waiting for a long, long time: Windows 7 on the multitude of tablet hardware options will be just like Windows 7 on desktop PCs: an appeal to the lowest common denominator, thereby hobbling both hardware and OS advances. (And I actually like Windows 7, so belay the Apple fanboy comments for a moment.) But what about an Ubuntu tablet? The svelt, modular Linux kernel has breathed new life into many aging PCs, and Canonical has been working on a netbook-specific interface for Ubuntu for some time. They have multitouch support, now, too, so couldn’t they pretty quickly roll out a wonderful Ubuntu-powered tablet?

The multitouch stuff in Ubuntu is interesting in its own right, since they’re developing a whole “touch language” that will allow for chaining touch sequences into sentences of complex actions. I’m actually quite excited to see how this develops, especially since the multitouch libraries are hosted on Launchpad for public consumption and participation. More on this below.

Before reading my thoughts on the matter, take a look at this opinion piece over at Shanzai.com: Could Ubuntu make the x86 tablet more attractive?. It’s an interesting, if somewhat myopic, look at the question.

My opinion: I don’t think Ubuntu is a good fit for tablets. I’m generally a big proponent of the “small pieces, loosely joined” mentality behind much of the Linux desktop; but I think it creates way too much complexity on a tablet form factor. The X window system alone, I think, is too much for a tablet, and then Ubuntu is going to heap on D-BUS messaging and the various GNOME pieces and parts, and before long the tablet is too complex for its own good. You don’t need a multiuser operating system running on a tablet.

I’m a huge Linux and Free Software advocate, and I do want to see it succeed in a general sense in the tablet market. I think that Android is the best bet to make that happen. People see “Apple iOS” marketed on iPhones and iPads, and most people have at least passing familiarity with an iPhone, so they think to themselves “Oh, the iPad is like a gigantic iPhone. I can handle that.” People see the word Ubuntu and either say “What’s that?” or they say “Oh yeah, I remember when Wal-Mart was pushing those crappy $200 desktop PCs with Ubuntu.” Either way, they have a strong negative reaction.

But say “Look at this Android tablet!” and people will say “Android? Like on those Motorola phones?” Their interest will be piqued. They’ll know that there are a plethora of apps available. In short, they’ll have a more positive reaction, and will see the tablet for what it can be.

I’m eager to see Android mature, and for third-party application developers to really push the envelope of what the tablet form factor makes convenient. I’m hopeful that real competition can drive advancement, thereby making all consumers winners. I continue to advocate for Free Software solutions on all of the computing platforms I use. But just like I don’t use Ubuntu on a compute cluster for research purposes, I don’t expect to use Ubuntu on a tablet. Pick the right platform for the hardware and the job.