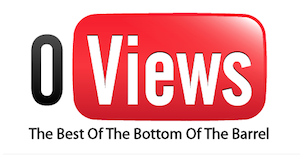 When it comes to online video, there is YouTube and then there is everyone else. Increasingly, videos on the service are getting a million or more views and some stars (like that Bieber kid) are getting made. So just upload a video to YouTube and became the next big thing, right? Well, not exactly.

While there are an increasing number of massively huge videos on YouTube, there’s also just more videos in general. And despite what you may think, not all of them can be watched every second of the day by everyone on the planet. In fact, there are plenty of — and very likely more — videos on the service with very, very few views. And believe it or not, there are some with zero views. Thankfully, there is a Tumblr blog to highlights those.

0 views is an excellent collection of the best of the worst of YouTube — or, “the best of the bottom of the barrel”, as they put it. Here you’ll find 12 year olds walking around “vlogging” and putting pads inside of shoes. Or you’ll find “Get it granddaughter!” Or the dog drinking cola.

To be honest, the best part of this site is that if it weren’t for the name “0 Views,” I could easily be led to believe that each of these videos was a viral success rather than a video with zero views.

Also, thanks to this site, several of these videos are now getting thousands of views. Awesome.