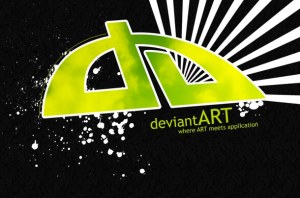 This week’s episode of Speaking Of… is the CEO of deviantART.

One of the greatest things about TechCrunch is that they celebrate and reward each writer’s own voice rather than forcing every writer to sing from the same hymn-sheet. They encourage differences of opinion. While deviantART isn’t Erick Schonfeld’s cup of tea, I’m definitely a huge fan. I have five pictures up on my wall that I’ve purchased from the site, and they’re absolutely beautiful.

Deviant recently passed the milestone of their 100 millionth submission or “Deviation” as they’re called. I think that’s pretty cool, but what I think is even cooler, is that they just celebrated their 10th year of being in business. I don’t know how old Angelo is, but I imagine that’s about 1/3rd of his life. For a startup entrepreneur, that’s a very long time.

DeviantArt was bootstrapped with 15k in cash, was profitable immediately and the company ran without any additional investment for 7 years. That too is pretty damn cool.  Today on Alexa it has a US traffic rank of 104, making it one of the country’s highest trafficked sites. And yet what’s interesting is that people think of them as being small. Maybe that’s the charm and what’s so special about their site for artists – it doesn’t feel large.

During my interview with Sotira, we traveled back to the site’s roots. DevaintART was originally formed during an era where there was no such thing as a social network. Their artist profile pages, ability to add friendships and commenting system was new and filled an amazing market need for people to connect, share and sell their works. Sotira’s inspiration came from the early days of creating a site for Winamp skins. Their artists made other forms of art such as paintings and were looking for a digital home. Ten years later, you have one of the largest and most vibrant community-driven art sites online.

What advice does Sotira have for new entrepreneurs? For one thing, don’t be weak. He feels that the new crop of entrepreneurs has it a lot easier than he did and needs to do more with very little. He also feels that his generation built platforms while the new generation will be all about marketing, creating the most powerful generation of marketers the world has ever seen.

The title of the episode is Speaking Of… Flying, because of Angelo’s love for flying RC helicopters and the fact that our interview takes place in a cockpit of a plane. How cool is that?