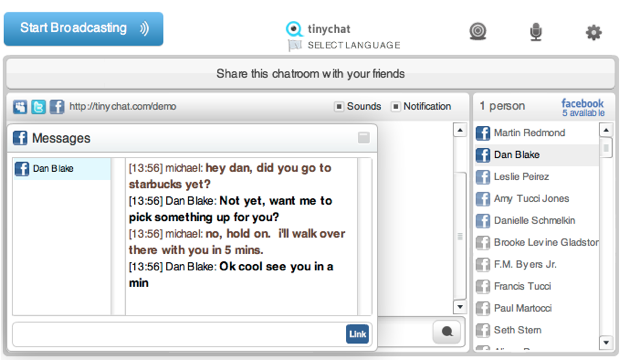 TinyChat, a straightforward chat platform that lets you create a throw-away chat room in a few clicks, is on a roll. The company has surpassed 1 million members in the 75 days since it began accepting user registrations, and is adding around 12,000 new members a day according to cofounder Martin Redmond (the service has been around for much longer than 75 days — it just didn’t promote user registration before then). Registration is optional, but it affords features like the ability to ‘follow’ other users and to tweak your site layout. And today TinyChat is launching a feature that will likely see that growth jump even more.

It’s hard to believe, but cofounder Dan Blake says that TinyChat has had almost no social features to speak of beyond its core text and video chatrooms. You’ve been able to ‘follow’ other users on the service which allowed you to send them private messages, but before now there hasn’t been a notion of presence — if you wanted to know which room your friend was chatting in, you’d have to ask them. Today that’s changing, as TinyChat is launching a broadcasting feature (which is essentially a Twitter clone built into the site) that lets users tell all of their followers when they’re joining a new chat room. This should help boost engagement and create a stronger sense of community, which will lead to even more growth.

Today the service is also adding support for the Facebook Chat protocol (you can now interact with users on Facebook from a TinyChat window and vice versa). Blake says that a TinyChat downloadable client based off of the Pidgin framework is also in the works and will support additional chat protocols, and an iPhone app is on the way as well.  Asked what’s driving this growth, Blake says that he can’t point to anything in particular, other than the fact that it’s just “really easy” to create a chat room with the service.

TinyChat is profitable and is still completely bootstrapped (it won the Crunchie for best bootstrapped startup at this year’s award show) with a team of six.