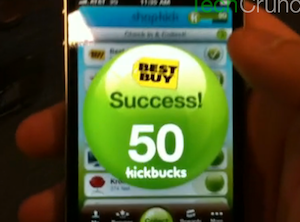 Best Buy is rolling out an in-store mobile couponing system in conjunction with a startup called shopkick. The system will be in place in 187 stores by tomorrow and 257 stores by October 1.

Earlier this month, we got a preview of how the system works (see video below). Instead of checking in, as you would with a geo app like Foursquare or Gowalla, shopkick automatically recognizes when someone with the shopkick app on their phone walks into a store. As MG wrote at the time:

The minute you enter a Best Buy location, your phone recognizes it and you get points and a message that there are deals available at this location. You can also use it to scan items and get more points and other potential deals.

Unlike other location-based apps, this doesn’t use GPS (or even WiFi triangulation), instead this is a custom hardware plus app system shopkick created and installs in partner stores. This means no more fake check-ins and it allows the app to do some other potentially interesting things

The shopkick app also lets you scan items with your phone to get deals, and as you earn points, or “kickbucks,” you can redeem them in a variety of ways, including discounts at the store, Facebook credits, or song downloads from Napster.