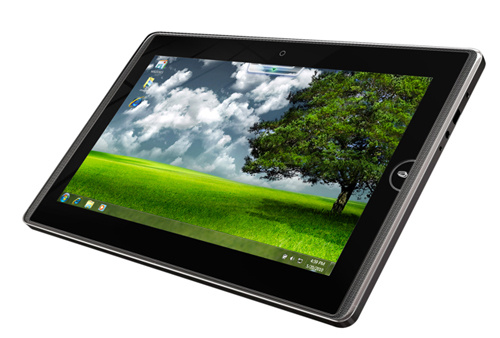 Not one to be left out of a market, Asus has been working on its latest entry to the tablet market for some time now, teasing both the Eee Tablet and Eee Pad over the last few months but never really setting a date or price. No longer!

The Eee Pad will cost $400 and run Android, but that’s about as much information as we get… except that it’s launching in March. March? Are you kidding me? There will be a new iPad out by then!

The Eee Tablet may be renamed the Eee Note, so that people don’t confuse it with tablet PCs. Okay, then why would you call it the Eee Tablet in the first place? And if you’re worried about customers being confused, why did you make your actual tablet look like an iPad, and then call it an EeePad? Answers are not forthcoming, friends. Anyway, the Eee Tablet will be sold in October for $300, and although I thought it looked cool in its demo, the fact is it’s just a monochrome LCD tablet running a special version of Linux. The truth is it combines the worst of both worlds. By the time it comes out we may be hearing about color e-ink devices, too.

More interesting is the 12-inch tablet announced by Asus, which will cost $1000 and dock with a station to become a regular laptop — not unlike the U1 from Lenovo. And then there will be the other other tablet, which will be ARM-powered, run Windows Embedded Compact 7 Itty-Bitty Eensy-Weensy Edition, and will sell for between $400 and $500.

Really hedging their bets, aren’t they?