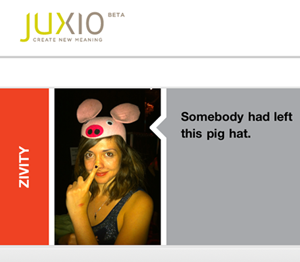 Juxio is a service that allows you to create “Juxes,” which are Mondrian-like combinations of event-related text, title and image that you can combine like pieces of a puzzle to well, do all sorts of things, but namely create slideshows you can share with your friends through Facebook and Twitter.

The Juxio iPhone app interface is incredibly intuitive, and I like that you don’t have to log in to create a Juxe (see the one that I made above), only to share one. I also give them props for their ambition in “trying to create a new visual way to communicate” and while the noun “Juxe” (from “juxtaposition”) sounds a little silly, I’m sure that’s what many people thought about the noun “Tweet.”

Presenting photos and text combinations in attractive formats has gained some traction lately with Twitpic’s launch of Twitpic Gallery,  and the rise of social/visual story telling services like Pictory and Shutterfly. However, it’s hard for me to conceive of the average non-design freak Facebook and Twitter user getting addicted to channeling much of their visual communication via Juxes.

Juxio is a privately funded company whose founders Larry Gormley and Will Younker are on their third startup (their first company “Submit It!” was sold to Microsoft). Juxio for the iPhone is now available in the app store and the Juxio web platform is currently in private beta. Juxio is also giving out invites to the first 500 TechCrunch readers, so act fast design freaks. 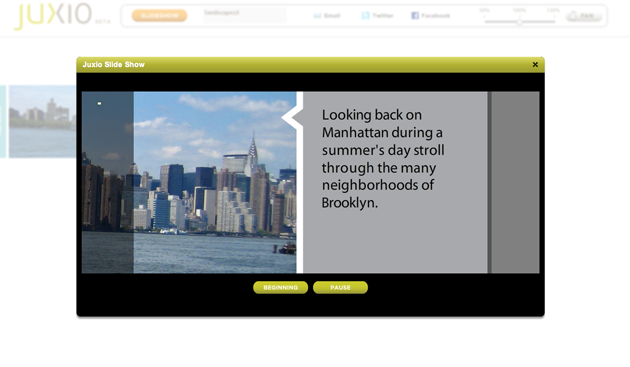 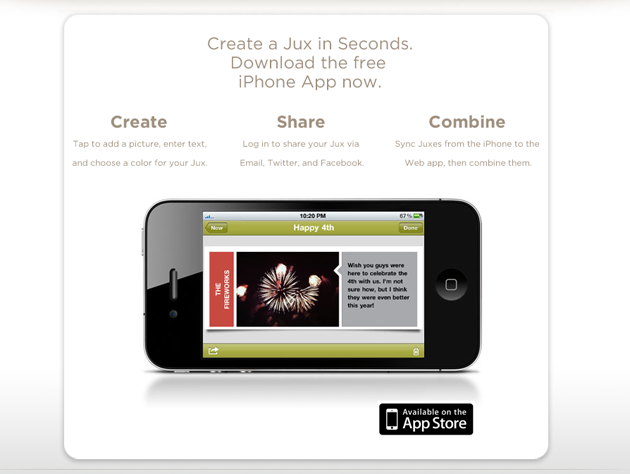