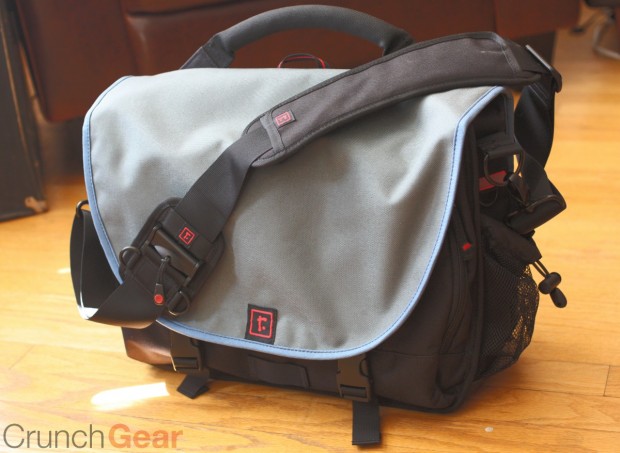 Short version: A great bag with some interesting strengths and only a few drawbacks. Good for laptops and accessories, not so much for cameras or bulky items.

In general there seem to be two type of bags: those molded to a purpose and those made to serve any purpose. There are strengths on both sides, and although I tend to use the unmolded type, I can certainly appreciate a good molded bag. The Commuter 2.0 is definitely one of those.

This bag is clearly made with a certain type of user in mind: laptop-toting, work-on-the-run, super-organized commuter types. Possibly even bike-to-work guys; the weather sealing is a nod that way, but other than that it’s not really a riding style. The bag itself has been around since 2008, but recently saw some revisions, including upgrading several materials and adding some extra storage to the outside of the bag. I can picture the bag before the improvements and can definitely say I prefer it like this.

The bag is of a sort of chubby, free-standing nature — it won’t fall over unless you push it, open or closed. The bottom has a very rugged-feeling, knobbly waterproof material, so you don’t need to be afraid about putting it down on dirt, wet pavement, or a gross food court floor. The shoulder strap will touch the ground, though, and it’s less rugged, so be aware of it. Of course, the rest of the bag is weather-sealed, as well.

There are two mesh compartments on the outside for water bottles, keys, or what have you, and inside them are two small pockets just large enough for an average-sized phone, plane ticket, or other item you need quick access to. There’s also the “stationery” compartment on the back of the bag, which kind of bugs me: arrange your pens and such wrong and they’ll poke you in the back. This pocket would have made more sense inside the main compartment, with some extra padding here instead. 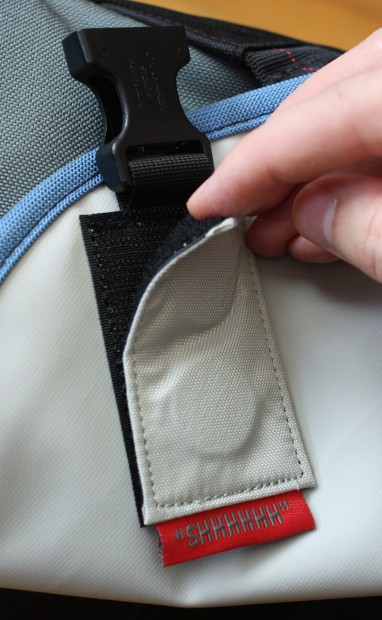 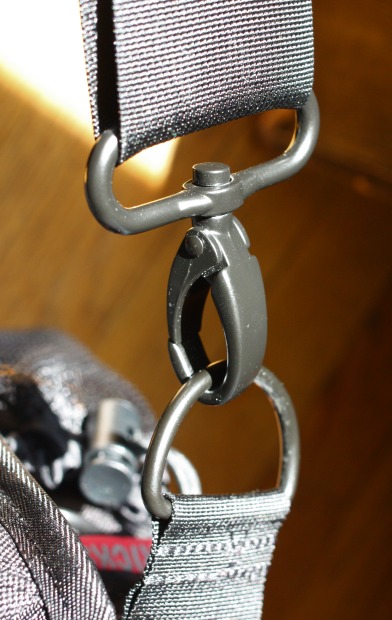 The flap comes in a number of colors and textures, but the usual flavors are there as well, and it looks very tasteful in the slightly iridescent “steel” color I’ve been using. There is also a very nice customizer on Rickshaw’s site. It’s secured by several means: the usual clips, mounted in the usual place, and then two strips of velcro on the inside, which can be covered over with strips of magnets. I like the magnets. When I just throw the flap down after getting something out, they make sure it goes down right. The magnet strips are helpfully labeled “shh!” because they certainly are quieter than the velcro.

The shoulder strap is a complicated-looking affair. It’s attached on both ends by a strap, connected to a D-ring, connected to a pinch-clip, connected by a rotating widget to an O-ring, through which the actual strap is threaded. To me it sounds like a lot of failure points, but the pieces are made of metal and seem unlikely to bend or break. They do tend to click a bit as you walk and the weight settles differently. It’s adjusted with a great little quick-adjust system that, although actually simple and effective, looks like it should come with its own instruction manual. The padding was comfortable and didn’t slip on my shoulder, although the slightly thin, slick nylon straps did have some slippage of their own. It’s worth noting that you can buy a different strap for $5. 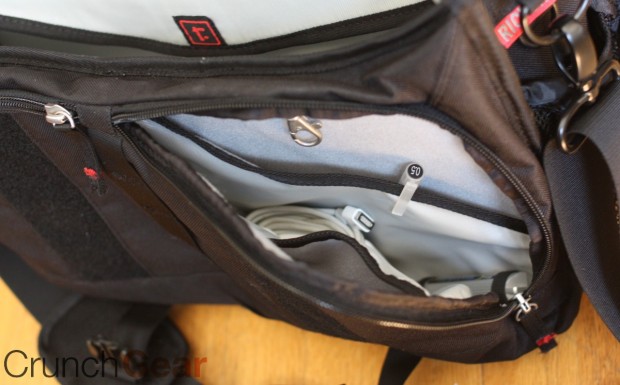 Inside, you have your main compartment and two square pockets that open along the outside corners (think unzipping from the top inside corner to the bottom outside corner). The small pockets have sub-pockets for SD cards, cables and whatnot, though I would have liked to see some mesh in there. The left pocket thoughtfully includes a lanyard with clips on it, onto which you can affix your ID, keys, or Inception-style totem. 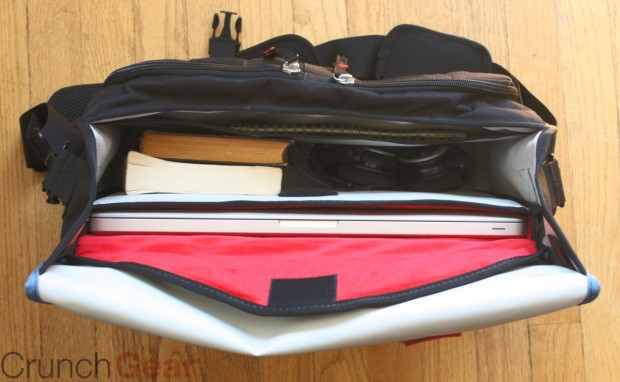 One of the improvements I mentioned was a resizing and material improvement of the laptop sleeve. It certainly feels secure in there, I can tell you that much. A 15″ MacBook Pro fits it like a hand in a glove, but the fleece lining makes it easy to pull in and out. It closes with a little velcro strap, and is attached to the rear of the pocket by two big velcro strips. It could be easier to take out, but then it wouldn’t feel as much a part of the bag. In front of this enclosure there is an empty space of roughly equal size to the laptop thing. Great for putting books, headphones, smallish electronics, and energy bars in… not so much for anything larger, like a few groceries or a DSLR. The bag isn’t designed to allow for such things, of course, because it’s of the molded persuasion, but it’s worth nothing that you won’t be able to fit more than a book, a pop and a sandwich in there. The structure of the bag prevents it from bulging out and accommodating more.

Rickshaw’s Commuter 2.0 is a great choice for someone who regularly carries their office with them — there’s plenty of room for laptop-related stuff and a few extras, and the build quality and weather sealing are extremely reassuring. But if you are looking for a more unstructured, all-purpose bag, go for something a little floppier. The Commuter’s rigid structure means it’s made to be used as intended, and that way is probably the best way to get your money’s worth.