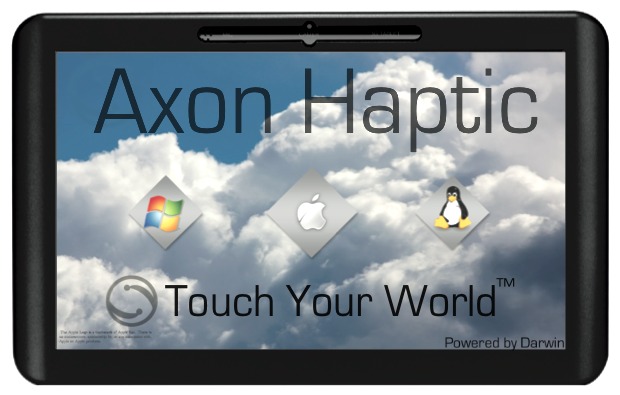 Back in April we heard word of an affordable hackintosh tablet called the Axon Haptic. We were skeptical, since all we had was an anonymous tip and a render — something any 3D concept artist could have cooked up in an hour or two. But now we know that the Axon Haptic is real, you’ll be able to pre-order it this week, and yes, it runs OS X.

Let’s just get right to the juicy part, shall we? The Haptic is designed from the ground up to be compatible with any Darwin OS. That includes several UNIX distributions such as PureDarwin, and of course Apple OS X. Of course, installing OS X on anything other than Apple hardware is a breach of the license agreement, so Axon Logic (the company that makes the Haptic) strongly urges you not to do it, though of course they are not responsible for how you use the open-source software they include. I, on the other hand, think it’s a great idea.

According to Axon Logic:

Besides using only quality components, they are specifically chosen to be compatible with Darwin. That gives you the freedom to run, in addition to Windows and Linux, any* Darwin OS. Darwin and all of its required components such as the mach_kernel and kexts are on an EFI partition to make it effortless to install your favorite XNU/Darwin OS. Just pop in the disk, and follow the directions. 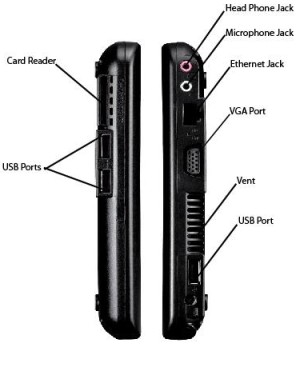 Basically you’re looking at a slightly overachieving netbook. Impressive in some ways, disappointing in others. The cost will be $800, or $750 if you get into the beta. To those of you who want to draw comparisons to ModBooks: yes, you can do that, but you’re looking at twice the price or more. That’s not trivial.

Obviously we would all like a better processor; there are plans to make a “Pro” version that runs on the MacBook Air logic board and a better processor, and of course you should be able to install anything compatible with the socket. But recall that hackintoshes on netbooks last year ran very well on more or less this exact setup. I’m concerned about the weight, but I don’t think there’s any risk people will use this as an e-reader.

As for the touchscreen, I am told that a capacitive one is not a good match with OS X. Maybe so with iOS, but with OS X you want to be able to write, draw, click this pixel and not the one next to it, etc. We’ll see.

Here’s a sneaky shot of the device in real life, and what appears to be a screenshot of the desktop. Nice multi-boot setup; with 320GB, you’ve got enough to have a decent-sized partition available, and this might be a great IT carry-around tool. 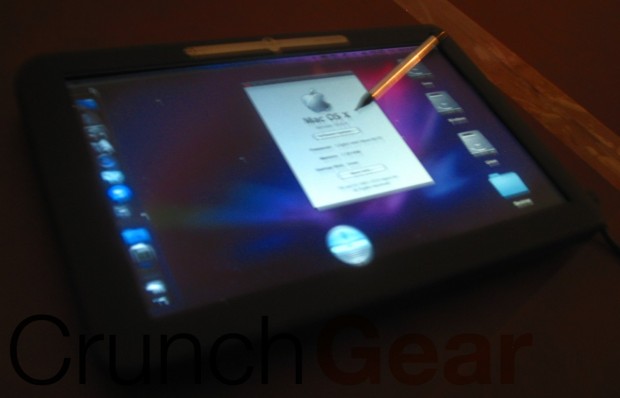 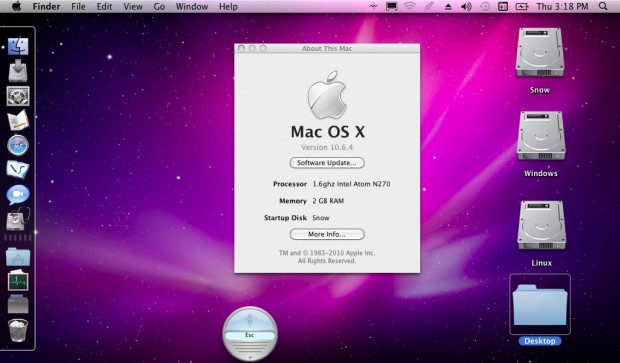 The question is, will people find this useful? Personally, I think a full-on OS X tablet would be more useful than a Windows 7 tablet. It’s just my opinion, but it seems that OS X has a more friendly interface for non-mouse interaction. But is it something that is useful at all? Obviously the keyboard will be less useful on the Haptic than on an iPad. Capacitive definitely has the lead there. But if the handwriting recognition is tolerable, that could be a great way of inputting your occasional login, search terms, or quick email. As with the iPad, it’s amazing what you can get used to. One might be tempted to suggest that this will be useful for artists, but Photoshop and other media-heavy programs will chug on that Atom N270. Even on a MacBook Air they’re not the swiftest.

I think that by searching for specific things the Haptic will be good at, we’re losing the forest in the trees. It runs OS X! Hello! You have an entire operating system. Browsing and email won’t be much better than an iPad, probably not as good, in fact. But what about all the other stuff you do on your Macs and PCs? You can plug a keyboard into this if you need to write a paper, or a gamepad to play SNES games. You can install Chrome, watch YouTube, whatever.

Ultimately, of course, it’s up to the user whether this is something for them. For some, it’s an unnecessary complication of a simple tablet. For others, it’s too much of a step down from a “real” computer. If an iPad is enough for you, get an iPad. If you need more power, get a MacBook Pro. If you want Windows, get an Lpad. This is just another option in the sea of options out there right now. I’m pretty sure it’s not the solution for me, but I guarantee there are plenty of people out there who are going to love this thing. Head over to Axon Logic (still very much under construction, they tell me) to see more and maybe even pre-order.

Update: it does appear to share its form factor with this tablet. Ben from Axon Logic says that the shell was commissioned by them for the Haptic but the company they hired has decided to use it on their own. The guts are different.