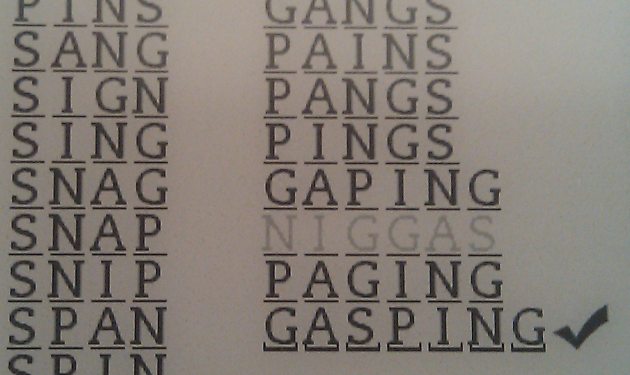 Amazon may want release an update to its “Every Word” Kindle game. It’s been discovered that a variant of the “n word” is included in the game as a viable, points-scoring word. You really don’t want to see that, no.

The oversight was first discovered by Erik Deckers.

I was playing last night, and had nearly completed a board. The main word was GASPING, and I was missing one 6-letter word. Not wanting to leave an incomplete board before I moved to the next level, I logged on to an online Scrabble anagram generator to see if I could find it.

The generator gave me three choices: agings, gaping, paging. The game accepted gaping and paging, but had a word in between that I just wasn’t getting.

Three different Scrabble generators gave me the same three words, so I decided to give up and see what the word was. I hit the button, and Easy Word filled in the missing word.

And that was the missing word.

UPDATE Just got word from Amazon, and they’re going to stop distributing the game because “the dictionary it uses does not block some inappropriate words.” Once the offending words are expunged, distribution will resume and an update will be released for people who downloaded the old version.