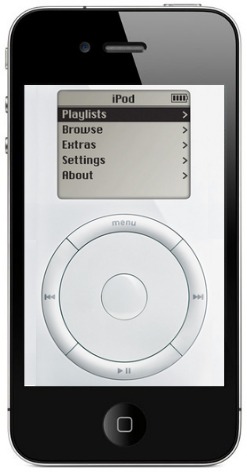 And why not? The iPod touch has always been positioned as a non-phone version of the current iPhone, though the hardware hasn’t always been completely in parallel. The original iPod touch got a hardware boost that put it past the original iPhone, but was leapfrogged by the 3GS and now, almost a year after the iPod touch 3rd generation announcement, it seems pretty natural that they should align its key features with the iPhone 4.

Apple wonk John Gruber has casually suggested on Daring Fireball that a few weeks will bring us a Retina display-toting and dual camera-equipped iPod touch. He’s been right with this sort of prediction before, and this particular one doesn’t even take any inside information. The timing and positioning are perfect for Apple to debut the iPod touch 4.

The two flagship features mentioned are, really, things that Apple could hardly fail to include. For an iPod touch to lack a Retina display at this point would put it at too great a disadvantage, and at any rate the move to a higher resolution is a one-way street for Apple. The change has to happen eventually for the lower-end device, and why not now?

Facetime, too, is a huge selling point, not just in spite of its limitations, but in a way because of them. Wi-Fi only (unless you feel like hacking it) makes it a nice bonus on the iPhone, but it transforms a non-3G PMP into a powerhouse communication device. For (presumably) around $300, you’re getting a video phone you can use immediately, with almost no setup required thanks to the email address calling on the way to iOS 4.1, which will likely ship with the device.

An iPod touch with these features will also stand up to competition extremely well. As Gruber notes, the Dell Streak looks like a chump when you place it next to an (admittedly fictional at this time) iPod touch 4G. Bigger screen? Why should you care (Apple will say) when their big screen only has two thirds the pixels of ours? Skype and Google Voice? Why bother when you’ve got free unlimited video calling built-in, and (hopefully) soon becoming the “open standard” of which Apple spoke?

The only question is (and I ask this as a total Apple non-fanboy, people, so calm down): can Apple make enough of them? Seriously — the Retina displays and A4 processor manufacturing facilities are in all likelihood working at full capacity, and to introduce another product would likely put them over their limits by X per month. This is just speculation on my part, but even for Apple, the numbers of units being put together are pretty high, and they might have to (at the very least) put off availability for a month or two to build up stock.

I haven’t heard anything from the usual sources about increases in LCD orders from Apple, but they’re good about isolating parts of the supply chain, and it’s possible that Apple has been assembling these for some time now and restricting iPhone 4 production in order to have a timely iPod touch 4 launch.