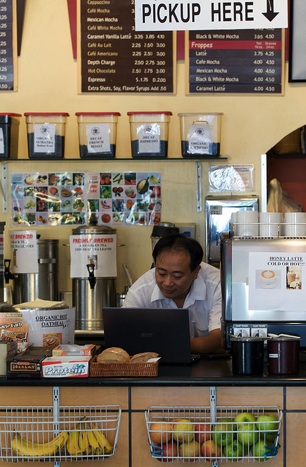 Editor’s note: With the growth of local commerce on the Web, the links between online and physical commerce are becoming stronger. In this guest post, Alex Rampell, the CEO and founder of TrialPay, explores the forces behind what he calls “online2offline” commerce.

What do Groupon, OpenTable, Restaurant.com, and SpaFinder all have in common? They grease the wheels of online-to-offline commerce.

Groupon’s growth has been nothing short of extraordinary, but it’s merely a small subset of an even larger category which I’d like to call online-to-offline commerce, or On2Off (O2O) commerce, in the vein of other commerce terms like B2C, B2B, and C2C.

Bear with me. The key to O2O is that it finds consumers online and brings them into real-world stores. It is a combination of payment model and foot traffic generator for merchants (as well as a “discovery” mechanism for consumers) that creates offline purchases. It is inherently measurable, since every transaction (or reservation, for things like OpenTable) happens online. This is distinctively different from the directory model (think: Yelp, CitySearch, etc) in that the addition of payment helps quantify performance and close the loop—more on that later.

In retrospect, the fact that this is “big,” or that Groupon has been able to grow high-margin revenues faster than almost any other company in the history of the Internet, seems pretty obvious. Your average ecommerce shopper spends about $1,000 per year. Let’s say your average American earns about $40,000 per year. What happens to the other $39,000? (The delta is higher when you consider that ecommerce shoppers are higher-income Americans than most, but the point is the same).

Answer: most of it (disposable income after taxes) is spent locally. You spend money at coffee shops, bars, gyms, restaurants, gas stations, plumbers, dry-cleaners, and hair salons. Excluding travel, online B2C commerce is largely stuff that you order online and gets shipped to you in a box. It’s boring, although the ecommerce industry has figured out an increasing number of items to sell online (witness Zappos’s success with shoes: $0->$1B in 10 years, or BlueNile’s with jewelry).

FedEx can’t deliver social experiences like restaurants, bars, Yoga, sailing, tennis lessons, or pole dancing, but Groupon does. Moreover, for your locally owned and operated Yoga studio, there is little marginal cost to add customers to a partially filled class, meaning that the business model of reselling “local” is often more lucrative than the traditional ecommerce model of buying commodity inventory low, selling it higher, and keeping the difference while managing perishable or depreciating inventory.

The important thing about companies like O2O commerce companies is that performance is readily quantifiable, which is one of the tenets of O2O commerce. Traditional ecommerce tracks conversion using things like cookies and pixels. Zappos can determine their ROI for online marketing because every completed order has “tracking code” on the confirmation page. Offline commerce doesn’t have this luxury; the bouncer at the bar isn’t examining your iPhone’s browsing history. But O2O makes this easy; because the transaction happens online, the same tools are now available to the offline world, and the whole thing is brokered via intermediaries like OpenTable or SpaFinder. This has proven to be a far more profitable and scalable model than selling advertising to local establishments; it’s entirely due to the collection of payment by the online intermediary.

Does Groupon deserve a billion-dollar valuation? It’s easy to see a world where O2O commerce dwarfs traditional (stuff in a box) e-commerce—simply because offline commerce itself dwarfs online commerce, and O2O is simply shifting the discovery and payment online. If Groupon can grow its leadership position, I predict a multi-billion dollar valuation based on discounted cash flow alone. Groupon is not a gimmick or a game, but a successful example of offline commerce being driven by an online storefront and transaction engine.

Venture capitalists and entrepreneurs would be wise to think beyond cloning the “deal of the day” concept—and instead think about how the discovery, payment, and performance measurement of offline commerce can move online. This will have ripple effects across the whole Internet industry — advertising, payments, and commerce — as trillions of dollars in local consumer spending increasingly begin online.