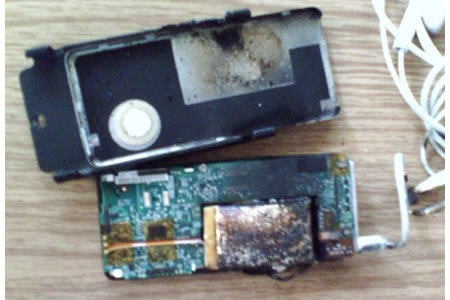 If you’re Apple and manufacture and sell hundreds of millions of electronic devices over the years, accidents are unavoidable. But according to Japan’s Ministry of Economy, Trade and Industry (METI), Apple’s local subsidiary failed to report 34 mostly minor accidents involving the iPod nano (first generation).

It sounds slightly ridiculous, but even though no one was hurt during those accidents (mostly overheating incidents), the METI posted an official release about the investigation on its website [JP, PDF]. The ministry announced it will ask Apply to provide additional details on the accidents and is currently reviewing big A’s ideas on how to prevent similar cases from happening again in the future.

The background for the harsh treatment may be that Apple had to deal with the Japanese government quite often in recent years, including some more serious cases that involved the iPod nano. In the past, METI also tried to “convince” Apple Japan to recall iPods it deemed potentially dangerous, which the company never did.

The company now is reportedly ready to post some kind of warning on its (Japanese) website to raise awareness of the danger.